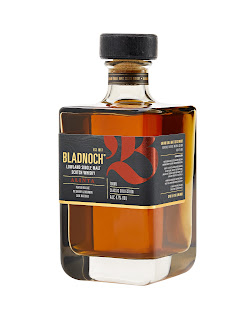 The Alinta is the latest addition to the core range of the Lowland distillery of Bladnoch. It is the first known smoky expression in the distillery's history. The spirit was distilled from peated malt that is produced for just a short period each year and accounts for under 10% of all spirit made there. Alinta has been matured in first-fill ex-bourbon barrels and first-fill ex-Pedro Ximenez casks. The casks were hand selected and married together by Dr. Nick Savage, the Master Distiller at Bladnoch. The word 'alinta' translates as 'fire' or 'smoke' from indigenous languages found in southeast Australia and references the heritage of David Prior, Bladnoch's Australian owner.

Bladnoch is located in a remote spot of Dumfries & Galloway, close to the village of Wigtown, in southern Scotland. It was founded in 1817 by brothers John and Thomas McClelland. The name is derived from the ancient Gaelic name Blaidzenoch and the nearby River Bladnoch supplies the water for the whisky production. The distillery has had a chequered history with numerous closures in its two centuries due to operational, financial and location reasons.

The most recent closure came in 2014 when the previous ownership went into liquidation. David Prior took over a year later and completed a major refurbishment of the distillery. Production restarted in the Summer of 2017 with a new visitor centre later opened by HRH Prince Charles in September 2019. Production capacity is now 1.5 million litres per year.

Bladnoch Alinta is bottled at 47% ABV and is both non chill-filtered and of natural colour. It is initially available at the distillery shop or via www.bladnoch.com. Distribution to selected world markets will follow later in 2022. A bottle will cost £80/ $105 US.

The colour is pale gold and the nose is full of youthful peat smoke. This has an ashy, woody and slightly mineralic quality. Underneath are aromas of vanilla, green apple and white chocolate along with a distinct whiff of malted cereals and biscuits. There are also suggestions of raisin and lemon zest.

On the palate this whisky has a pronounced freshness and vibrancy to it. The expressive and youthful peat smoke dominates and has a slightly acrid edge to it - think of bonfire ash and embers, charcoal and hints of dried seaweed, iodine and bitumen. The malted cereals and biscuit notes from the nose are also strong. These add to the earthy feel and give a pleasant bittersweet note.

It takes a little time for other elements to battle through. First to appear is green fruit (think of apple and pear especially), creamy vanilla and a hint of dessicated coconut. Then a blob of honey, some white chocolate, raisins and sultana with a late twist of lemon zest.

The finish is long, warm and drying. Having battled their way through the smoke, the fruity and sweet notes fade rapidly. This leaves the earthy cereals and gripping peat smoke to dominate again. A late pinch of cinnamon, cocoa and powdered ginger warm things further.

It is always interesting to sample new things from a distillery, especially when it is in a style that they are not necessarily known for. The Bladnoch Alinta is good and joins a couple of other Lowland peated single malts that have been released in recent years.

It is clearly youthful so it will be intriguing to see how the smokiness settles with more time. As it stands now the whisky is expressive, bold and a little brash. If you are a fan of smoky whiskies and want to try something different, then definitely search the Alinta out.