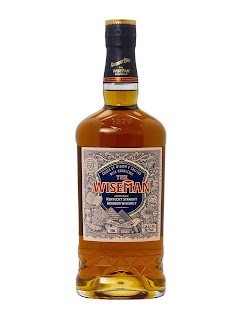 The Wiseman is a premium American bourbon from the brand of Kentucky Owl. The expression has just been released in the UK for the first time, following its launch in America last Autumn. The whiskey has been created by John Rhea, the Master Blender of Kentucky Owl. Rhea is a 40-year veteran of the bourbon industry with just over four decades of service at the Four Roses distillery. The Wiseman is a blend of four Kentucky-sourced bourbons - two four year olds (one with a high wheat content and one with high rye), a 5.5 year old and an 8.5 year old. The Wiseman forms part of a larger range in the USA. This range is scheduled to be introduced to the UK market in due course. Plans for the Kentucky Owl distillery in Bardstown, Kentucky are also being drawn up.

Kentucky Owl was found by Charles Mortimer Dedman in 1879. The distillery operated until the onset of Prohibition in America and the Government seized 25,000 gallons (113,500 litres) of maturing whiskey. Kentucky Owl never restarted once Prohibition lifted. Almost 100 years since its closure, Kentucky Owl was revived by Dedman's great, great grandson. After several years of research and blending the first product was released in 2017. Since then the small-batch range has expanded and has been shaped by an ethos of experimentation and innovation.

The Wiseman is bottled at 45.4% ABV and will be available in selected spirits retailers and via Amazon in the UK. A bottle will cost £60.For further information on Kentucky Owl, please visit www.kentuckyowlbourbon.com.

The colour is bright gold and the nose is vibrant, bold and peppery. Sweet vanilla and cereal aromas rise first and these are joined by plenty of coconut, orange oil and a hint of apricot jam. The peppery nature softens with time to reveal pinches of cinnamon and cocoa.

On the palate this whiskey is full bodied and robust. It follows a similar path to the nose in that it is vibrant, bold and peppery to begin with. Heavy notes of sweet vanilla and freshly sawn oak kick things off and these are supported by further notes of dessicated coconut, candied orange peel and some drops of citrus oil. Underneath are some delicious tropical fruit characteristics that have elements of ripe pineapple, peach and apricot to them. Everything is underpinned by the distinct peppery nature, which evolves to become softer and warmer with time (think of baking spices especially). This warmth helps to drive the length of the palate and elongate the finish.

The finish becomes a little dry, spicy and oaky. The sweet and tropical notes fade quite quickly but this just accentuates the woodiness and warming spices. Charred oak, toasted coconut and warming cinnamon-like spices begin to dominate. A pinch of white pepper hits right at the end.

The Wiseman is a delicious bourbon that is full of flavourful characteristics. It is also versatile and we saw this at the UK launch event, where it worked well in such diverse cocktails as an Old Fashioned or Bourbon & Soda. We hope it does well, but it is entering a crowded market.

Our initial feeling is that the price could be a touch high compared to similar bourbons that are available, but only time will tell. Kentucky Owl has done well in America, but we will follow with interest how it develops. Especially once the distillery is built, in production and making their own liquid.