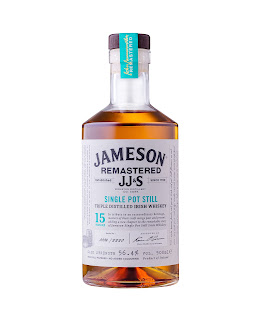 This whiskey is the first in a new series created by Jameson, the world's biggest selling Irish whiskey brand. The Jameson Anthology series will see new whiskeys put down one of two tracks - Remastered will be old classic expressions reinvented, while Remixed will have a more innovative and experimental edge. The first bottling sits within Remastered - the Jameson 15 years old Single Pot Still. This was an expression that last appeared in Jameson's range in 2000. The whiskey is constructed of three different pot still styles, all made at Midleton distillery in Co. Cork, that have been matured for between 15 and 17 years in either first-fill ex-bourbon barrels or first-fill ex-Oloroso sherry butts.

Jameson is owned by Irish Distillers Pernod Ricard and is produced at the Midleton distillery in Co. Cork. This was built in 1975 to replace the old Bow Street distillery in Dublin, which is now the brand's visitor centre. This original distillery was built by founder John Jameson in 1780. Midleton produces both single grain and single pot still whiskeys with a combined capacity of 64 million litres per year. This goes towards Jameson and other Irish Distillers brands such as Green Spot, Paddy, Power's and Redbreast.

The Jameson 15 years old Single Pot Still is released at the natural cask strength of 56.4% ABV and has already won its first award - a prestigious Gold from the IWSC 2022. It will be available exclusively via two ballots - one to the brand's Barrel Club members on April 4 and one to the general public on April 8. Bottles will cost €300. Further bottlings in the series will follow in time.

The colour is deep gold is rich, fruity and nutty. Initial aromas of raisin, hazelnut and candied orange peel rise from the glass. They are joined by further aromas of golden syrup and honeycomb with hints of ripe tropical fruits (think of mango and peach especially), milk chocolate and bittersweet cereals evolving in the background.

On the palate this whiskey is bold, rich and peppery. Notes of red apple and tropical fruit (that peach from the nose in particular) develop first and are backed up by further notes of milk chocolate and malted biscuits. Underpinning everything is a defined sweetness - this is centred around fudge, toffee and caramel characteristics. The malted biscuit note grows and this adds structure and complexity. There is a distinct oaky note that begins to come through to give a pleasant woody dryness and warmth. This is accentuated by pinches of cinnamon, powdered ginger and cocoa. A late drop of orange oil rounds things off nicely.

The finish becomes increasingly dry and warming with those pinches of spice and cocoa again coming through nicely. The oak notes add some lovely vanilla and woody elements. The sweeter elements slowly fade to leave a delicious peppery finish.

This 15 years old Single Pot Still is a lovely expression of Jameson and we like that it is released at cask strength. This adds wonderful structure, depth and complexity. It also exaggerates the aromas and flavours, and allows them to shine. We also like the concept of the new series and it will be interesting to see what follows this strong first release.

Our only issue is the price. This seems high at €300 even though this is limited edition, cask strength and part of a new series. Especially when you consider the bottle is 50cl rather than the standard 70cl. That said, we have no doubt that this will sell quickly.