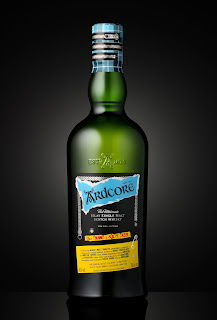 Ardbeg
The Islay distillery of Ardbeg have announced details of their annual Ardbeg Day bottling for the Feis Ile festival. The 2022 offering is named Ardcore and has been inspired by punk rock music. The whisky has been produced using rare black malt, which is a first for Ardbeg, and takes the spirit in a dark, fiery and feisty direction. Ardbeg Ardcore has been developed by Dr. Bill Lumsden, the Head of Distilling & Whisky Creation at Ardbeg. The whisky will be released on Ardbeg Day (June 4 this year), which traditionally brings the Feis Ile festivities to an end. There will be two versions of Ardcore - a cask strength version for Ardbeg Committee members (50.1% ABV) and a regular release at 46% ABV. Both are non chill-filtered, of natural colour and will cost £100 per bottle. 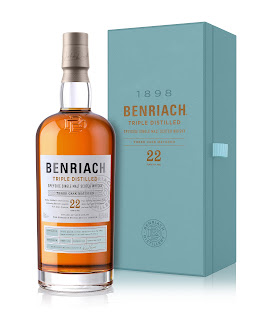 Benriach
The innovative Speyside distillery of Benriach has announced a major revamp of its travel retail single malt range, and a new expression. Three previous expressions have been repackaged in the new livery and re-named as Benriach Quarter Cask, Smoky Quarter Cask and Triple Distilled Ten. The new bottling is the Benriach 22 years old Triple Distilled - the brand's oldest ever triple distilled whisky. It has also undergone a triple maturation process in ex-bourbon, ex-sherry and virgin American oak casks. The result is bottled at 46.8% ABV, is non chill-filtered and of natural colour. A bottle will cost £125.
Both the Benriach Quarter Cask and Smoky Quarter Cask are bottled at 46% ABV and will cost £36. The Triple Distilled Ten is released at 43% ABV and will retail at £40. The four whiskies will be available exclusively in UK travel retail during April before receiving a wider world release in May.
Glenlivet 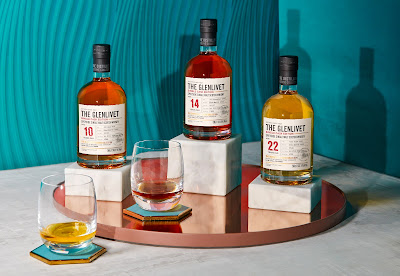 The famous Speyside distillery of Glenlivet has announced the release of three exclusive single malts to form the new Distillery Reserve Collection. Each bottling is taken from a single cask and is released at its natural cask strength. Each is also non chill-filtered and of natural colour. The new whiskies will only be available from the Glenlivet distillery visitor centre or via www.theglenlivet.com.
The first whisky is 10 years old - this has been drawn from a single first-fill ex-sherry butt, which has yielded 888 bottles. It is bottled at 59.1% ABV and will cost £70. This is joined by the 14 years old, which has also come from a single first-fill ex-sherry butt. There are 828 bottles at the natural strength of 61.9% ABV. A bottle will cost £90. The final bottling is the 22 years old. This has been matured in a single first-fill ex-bourbon barrel and is bottled at 52.1% ABV. There are just 252 bottles and each will cost £175. Please note - the bottle size is 50cl. Jura
The island distillery of Jura has added another whisky to its Signature Series range - the Jura 14 years old American Rye Cask. The single malt has initially been matured in American white oak ex-bourbon barrels before being transferred to ex-rye whiskey casks for a finishing period. It joins the Rum Cask Finish in the range and has been created by Gregg Glass, Whisky Maker and Blender for Jura, and his team. The Jura 14 years old American Rye Cask is bottled at 40% ABV and will initially be available in the UK. It will then be released to selected global markets during 2022. A bottle will cost £42.

"The vibrancy of our 14 year old American Rye Cask is matched only by the spirit of the community on the island. The close-knit group are an inspiration and the rye casks add a warming complexity and depth of flavour to our signature fresh and vibrant Jura spirit."
Gregg Glass. 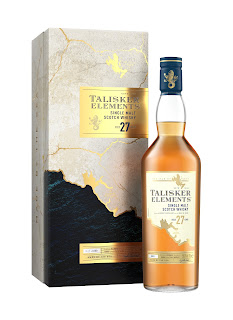 Talisker
The famous distillery from the western isle of Skye has announced a new single malt - Talisker Elements. The whisky is released at 27 years old and has undergone triple casking during maturation. This is only the second Talisker expression to follow this path. Initail maturation was in re-fill barrels, then heavily-charred casks before a final period in European oak puncheons. The Talisker Elements 27 years old will be exclusively available from the Talisker distillery, which will unveil a new visitor centre experience this Summer. It is bottled at the natural cask strength of 58% ABV and there are just 2,000 bottles. Each will cost £495.
Get Social With Us
Follow us for regular whisky updates and activities throughout the week.

posted by Whisky For Everyone at 2:18 PM