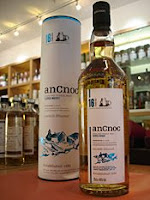 AnCnoc is a single malt whisky produced at the Knockdhu (pronounced Knock-doo) distillery in the Speyside region. The name of AnCnoc (pronounced a-knock) was created in 1993. The current owners, Inver House Distillers, felt that the name of Knockdhu was getting easily confused with another Speyside distillery, Knockando. They took the decision to rename the whisky produced at Knockdhu (which translates as 'black hill' in Gaelic) and it was changed to AnCnoc (simply 'the hill' in Gaelic), so as to avoid any confusion. The brand has recently been revamped with the new modern graphic packaging and advertising pushing sales up. The idea being to attract a younger crowd to their single malts.

The Knockdhu distillery was opened in 1893 and is relatively small, currently producing around 900,000 litres of whisky per year. It is located near to the town of Huntly on the south eastern side of Speyside. It is very close to the 'border' of Speyside and the Highlands, so is sometimes classed as a Highland whisky. The distillery is one of the few remaining that are run using traditional methods, rather than computers and mechanical processes. The core range has a 12 years old, this 16 years old and some more limited vintage releases (currently a 1975 and a 1994). Independent bottlings are rare but will be generally named as Knockdhu.

This AnCnoc 16 years old is pale lemon in colour with an aromatic nose. The nose has a fresh feeling with vanilla and citrus (imagine lemon zest) being the main components. Underneath these is a floral note (think of honeysuckle), something vegetal and a hint of liquorice (the combination of these last two reminding us of fresh fennel). On the palate, this is crisp and very light (much lighter than the more complex nose suggested). Unfortunately, the first thing you get on your taste buds is raw spirit but this soon dies away to give a pleasant mixture of vanilla oakiness, citrus (more like orange this time), that green vegetable/liquorice note (fennel, definately now) and a hint of something minty or eucalyptus. The finish is short and dry leaving your mouth watering and wanting a glass of water. Vanilla is dominant again with a slightly unpleasant and bitter woody note hanging around the longest.

This is a strange whisky. It offers a lovely and fresh nose but lacks the same level of complexity and depth on the palate. It feels light and thin in your mouth and the spirity nature of the palate and the finish cannot be ignored. Despite this, the whisky is quite enjoyable and refreshing and would be good on a warm day or in a cocktail (which is one of the ways that Inver House market the range). At £40-45 a bottle it has a lot of competition from more well known and established whiskies. The feeling is that it lacks the complexity of these competitors, some of which are cheaper, and therefore will struggle to stand up strongly against them.
posted by Matt C at 12:02 PM