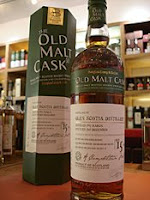 Glen Scotia (pronounced glen sco-sha) is one of Scotland's smallest and least known whisky distilleries. It has an annual operating capacity of only 750,000 litres and is one of only three remaining distilleries in operation in the region of Campbeltown. The other two are Springbank and Glengyle (which only opened in 2004), both of which are owned by the Mitchell family. The Campbeltown peninsula is located on the west Highland coast, roughly lying between Glasgow and the western isles. Glen Scotia is a cramped distillery and can be found on the main street of the town of Campbeltown. It was founded in 1832 and is the only distillery in Scotland to have stills made from steel alloy rather than copper.

The Campbeltown region once sustained over 30 distilleries and was a major force in whisky production. However, it was hit harder than the other regions during difficult times due to the remoteness of its location and the resulting transportation problems. To a certain degree Glen Scotia lives in the shadow of it's bigger and more famous neighbour, Springbank. It is currently owned by The Loch Lomond Distillery Company and they release only two regular single malt bottlings - a 12 years old and a rarer 17 years old. Both are hard to find, even in specialist whisky retailers. The most accessable way to try Glen Scotia is through the number of independent bottlings that are available on the market, such as this 15 years old that is released through the Glasgow based Douglas Laing & Co as part of their 'Old Malt Cask' range.

The colour is a gorgeous dark amber and the nose is lovely and aromatic. It has an interesting and sumptuous mix of dried fruit (think of raisins especially) and warm spices (imagine cinnamon) from its sherry cask maturation that are then combining with a light, earthy smokiness (think of damp soil and moss). On the palate, that smokiness is at the forefront but then dies away gradually to reveal more subtle sweet notes - cereal grains, honey, dried fruits and caramel. The spiciness from the nose seems a bit hotter though (more reminiscent of ginger and peppercorns). Despite the numerous sweet elements, this whisky does not feel too sweet as the mossy smokiness and a final, slightly metallic note balance it out well. The finish is long and becomes fairly dry with the smoke finally fading to nothing. That slight metallic note (can only be described as quite tinny) hangs around also and is the only negative element present, although it is the last thing you taste so it stays in your memory. This is a shame.

This is a good whisky and would be a great choice to introduce someone to smoky whisky, as it is lightly peated. The sherry cask maturation has worked very well here and compliments that level of smokiness almost perfectly. It would also go well with a mild style of cigar. A bottle will cost £55-60 from specialist whisky retailers and is a good example of what good quality can be found if you explore some of Scotland's lesser known distilleries.
posted by Matt C at 3:11 PM