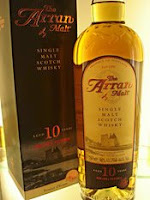 The Arran distillery is one of the newest distilleries in Scotland. It was opened by an independent group called the Isle of Arran Distillers Limited in 1993 and production began in 1995. Their idea was to use traditional production methods rather than modern day alternatives and to experiment with their spirit by maturing some of it in different wine casks from around Europe. The isle of Arran is sandwiched between the west Highland coast and the Campbeltown peninsula and the distillery is the first to operate on the island for over 150 years. The distillery is one of Scotland's smallest (producing around 750,000 litres per year) and is located just outside Lochranza, a village that gives it's name to a blended whisky that Arran produce. The core range reflects their small capacity and consists of this 10 years old, a cask strength version (called 100 proof) and an un-chillfiltered version.

The colour is light and the nose is crisp. There is a citrus note that comes first (imagine lemon zest), then gorgeous fresh fruit (made me think of crisp green apples) and then some sweet malted barley. This mix seems unusual but is interesting and just makes you want to taste it! This is light and refreshing on the palate but there are lots of elements jostling for attention. The citrus and malty notes from the nose are there, as well as a woodiness (vanilla), something spicy (reminding me of nutmeg or cinammon) and an interesting yeast characteristic that comes through at the end. This yeastiness gives the whisky a beautiful creaminess. The finish is short, refreshing and slightly dry with the spiciness and maltiness prominent. Arran whisky is becoming more widely available, but is still mostly only available in specialist retailers. This is a decent whisky, being light and very refreshing yet extremely complex.
posted by Matt C at 5:52 PM