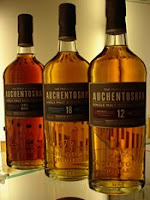 Auchentoshan is a Lowlands distillery and is the nearest one to Glasgow, being located just to the north of the city. The distillery was opened in 1823 and is the only one in Scotland to continually practice triple distillation of their spirit. Other Scottish distilleries occasionally do this (for example, Springbank release Hazelburn which is triple distilled but they only produce it for one month of the year). Triple distillation produces a smoother, lighter spirit that many people find easier to drink and the process is more commonly associated with Irish whiskey. Why are Auchentoshan the only place to triple distil? During the Irish potato famine in the early 1800s, immigrants came over to the Glasgow area to escape bringing the process with them and maybe introducing the idea to the distillery owners. Now, Auchentoshan is owned by Morrison Bowmore and produces 1.75 million litres per year. A new visitor centre has just been opened and has been voted one of the best in Scotland. It is also one of the most visited, helped by it's close proxity to Glasgow. As a continuation of this rebranding, the range of whiskies have been revamped and repackaged. This new core range has been out for a couple of months, so it seemed about time to try!

The Classic
A bottle of this should cost between £20-25 and the whisky is released with no stated age. This usually indicates that it may be a young whisky and as a result the distillery doesn’t put the age on the label. This is quite smooth for a young whisky (they can normally feel harsh as the alcohol hasn’t had time to mellow and marry with the other flavours). It is rich and creamy with lots of vanilla and coconut present (classic characteristics of bourbon cask maturation). The whisky also has a pleasant malty flavour that mixes with an interesting citrus note (imagine lemon or lime zest). Very nice stuff, good value and would be great as an aperitif.

12 years old
This has lots of sherry cask influence from the beginning. It is extremely fruity (think of raisins and candied peel – both classic sherry cask characteristics) with heaps of sweet vanilla, citrus (orange zest, I think) and spices (hints of cinnamon, ginger and something antiseptic, like cloves). Quite a long and dry finish that is packed with dried fruits and a bit of spice. Retails for £25-30.

Three Wood
Maturation in three different types of wood casks (bourbon then Oloroso sherry then Pedro Ximenez sherry) gives this whisky it’s name and makes it a dark, intense beast. Again, there is no age stated. There is lots of influence from the casks with a mix of buttery caramel, nuts (hazelnuts, I think), treacle/burnt sugar, dried fruit (raisins and candied orange peel/marmalade) and dark fruits (imagine blackberries or currants) coming through. Very intense with almost too much wood influence, that gives an unpleasant bitterness especially on the finish. Should cost £35-40 and is very much one for after dinner.

18 years old
Another intense one with loads of sherry cask influence that almost counteracts the lightness and smoothness that is created by triple distillation. Very fruity (that dried fruit again) and nutty (almonds, I think), this has other elements of sweet barley, caramel, honey and citrus (reminding me of orange zest) present. A big, long finish that coats the inside of your mouth and is quite well balanced. Would be great as an after dinner drink and costs around £50 per bottle.
posted by Matt C at 3:28 PM