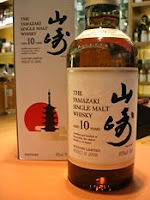 Yamazaki was the first whisky distillery to open in Japan. The idea of distilling whisky was the brainchild of the president of the local province and production began in 1924. The location of Yamazaki was chosen because of three elements. 1) it lies between the major cities of Osaka and Kyoto which had very good transport links, 2) the reknowned quality of the local water, which is among the purest in Japan and 3) the fact that three local rivers converge where the distillery is built. The temperature of each river is slightly different and this creates a naturally humid foggy condition, that it was felt would be ideal for maturing whisky. Originally, whisky casks would be imported from Scotland or sherry casks from Spain in order to mature the whisky. This was an expensive practice so Yamazaki started to experiment by using local wood to build their own casks. these were made from mizunara or 'Japanese oak' that gave the whisky a unique flavour that proved popular. However, this wood was more prone to leaking during maturation so use of mizunara was severely reduced. Now at Yamazaki, they have reverted to using mizunara casks for some of the maturation as they realised it gave their whisky a unique 'oriental' flavour. This whisky is then combined with whisky matured in bourbon or sherry casks. The core Yamazaki range consists of this 10 years old, a 12 years old and an 18 years old. Other ages are released in very limited amounts but are extremely expensive and sought after.

The colour is light and golden with a gorgeous fresh nose. The fragrance of the wood is great with lots of vanilla and honey there. This is then followed by fresh fruit (imagine pears and apples) and a hint of citrus (reminding me of orange peel). On the palate, the whisky is light and refreshing with the complex combination of elements from the nose coming together, especially the pears and vanilla (imagine a pear and custard danish pastry). These are joined by some spiciness (cinnamon and a hint of cloves, I think) and a marmalade type citrus sweetness. The finish is medium to long with those spices and a nice bit of honey prominent. This is a very good and enjoyable whisky that is light and refreshing, yet complex. Priced between £25-30, it is good value and a great alternative to Scottish or Irish whiskies of the same age.
posted by Matt C at 3:56 PM