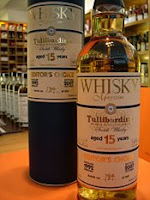 This bottling was selected for release by the editor of The Whisky Magazine. It was distilled in February 1992 and bottled in October 2007 to celebrate the Whisky Live 2007 event in Glasgow. The Tullibardine distillery is located in the southern Highlands, just north of Stirling, and is a one of Scotland's younger distilleries having opened in 1949. It is currently owned by an independent company called the Tullibardine Distillery Limited, who took the distillery over in 2003. Before this takeover, Tullibardine had been mothballed for nearly nine years having been shut down by the previous owners. Mothballing is the process where a distillery ceases production but everything remains intact, ready to start up again. The distillery capacity is 2.5 million litres per year and all current stock that is being released is from the pre-mothballing period. Tullibardine is quite unknown in the UK (only 10% of stock is sold here) but it is much more popular abroad and is exported to nearly 50 countries. The core range is small and independent bottlings are pretty much non-existent.

On the nose, this 15 years old is light and malty, with some vanilla and nuttiness (imagine almonds or marzipan) coming through. However, there is also an overpowering blast of raw alcoholic spirit that gives your nose hairs something to think about! This rawness hits you on the palate and only after some time do other flavours battle their way through. There is some malted barley sweetness, some woody vanilla, maybe a blob of honey and some citrus (lemon zest, I think). There is also an unpleasant underlying bitterness, that reminded me of when you bite a grape seed. The finish is crisp, short, pretty dry and overly spirity. As this is a cask strength whisky, I tried it later with some water added and this did negate some of the raw spirit sensations on the nose, palate and finish but unfortunately, not that bitterness. It is much more pleasant with water and would be good as a light pre-dinner drink. This is only available in a limited number of independent retailers and there are only 230 bottles in this particular release. It should be about £50 a bottle.
posted by Matt C at 1:11 PM