Have just tried ... Singleton of Dufftown 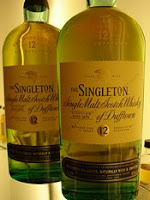 The Dufftown distillery is located in the town of Dufftown (unsurprisingly!), in the heart of Speyside. The town has the largest concerntration of distilleries in Scotland, with seven officially within it's borders (Dufftown, Glenfiddich, Balvenie, Kininvie, Mortlach and Glendullan plus Pittyvaich, which has closed). The distillery is owned by drinks giant Diageo and is their largest, with a capacity of four million litres per year. Hardly any of this amount is released as single malt, as a massive 98% goes towards Diageo's range of blended whiskies. Bell's, which is the UK's second best selling whisky, takes away the lion's share of this. Diageo release only two single malts from the distillery - a 15 years old that forms part of their 'flora & fauna' range and this 12 years old that is named 'the Singleton'. Independent bottlings are extremely rare. 'the Singleton' is one of the brands currently being heavily promoted by Diageo and as a result, it is becoming available in more retailers.

The nose is rich with vanilla and a woodiness (think of sawdust). There is also an interesting yeasty note (imagine fresh dough) and something nutty (almonds, I think). It is fairly rich on the palate with that nuttiness and vanilla appearing again. These are joined by some dried fruits (think of raisins and sultanas) and the yeasty quality from the nose has become more biscuit like (this may sound weird but it reminded me of digestive biscuits). The finish is quite short and refreshing. This is a decent, solid whisky that is good but quite basic and one dimensional. It has a good balance and would be an excellent choice to introduce someone to whisky. This should cost between £30-35 a bottle.
posted by Matt C at 10:45 AM

It's all about my passion: alcohol and whisky! I think you should add more initiatives like this one. We need more informative blogs, specially with this type of content. There are to many things to know about the whiskies around the world.