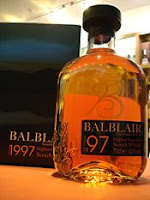 Balblair is one of Scotland's oldest distilleries. It was opened in 1790 and only Glenturret, Bowmore and Strathisla have been operating longer. This northern Highland distillery is located on the shores of the Dornoch Firth, in the village of Ederton and is reasonably small, producing around 1.3 million litres per year. The majority of the whisky produced goes in to the popular blend Hankey Bannister, with only about 10% being released as Balblair single malt. This amount is changing though as Balblair becomes more recognised and the latest range continues to add to the numerous worldwide awards that it has recently won. The core range is released as vintages, rather than the more common age statement in numbers of years - there is an evergrowing range including a 1965, 1975, 1978, 1978, 1979, this 1989, 1997, 1990 and a 2000. Independent bottlings are available but stocks vary from year to year.

The 1997 is a gorgeous golden honey colour with a succulent nose that is jammed full of dried fruits (think of sultanas and candied citrus peel), vanilla, spices (imagine nutmeg and cinnamon - a classic characteristic of bourbon cask maturation) and some tropical fruit (again dried, think of pineapple and mango). On the palate, these elements are joined by more dried fruit/ candied citrus peel (reminding me of orange marmalade), some fresh stone fruits (something like peaches or apricots) and more sweet vanilla. That nutmeg spiciness from the nose is prominent. The finish is long and creamy with a citrusy tang and the sultana, vanilla and spice notes coming to the fore. This is a very good whisky, especially for the price (around £30 a bottle). It has complexity but is also very approachable so would be a good choice for a beginner or a whisky sceptic.
posted by Matt C at 3:32 PM