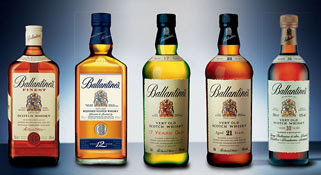 Ballantine's is a famous whisky brand that boasts a multi award winning range of blended whiskies. The range consists of the best selling Finest, plus 12, 17, 21 and 30 years old versions. The range is amongst the best selling whiskies in the world and is currently in second place for total volume sales, behind only Johnnie Walker, selling 70 million bottles a year. Ballantine's whisky was first produced in 1869 by a Edinburgh grocer named George Ballantine. He had expanded his grocery business in to the area of wines and spirits, before deciding to start blending his own whiskies. The whisky business was booming at the time and many people began producing their own blends during this period, including the now famous names of William Teacher and Arthur Bell.

Ballantine's whisky became very popular very quickly and he recruited his two sons, Archibald and George Jnr, and set up George Ballantine & Sons Ltd. It remained in the family until his sons sold the company in 1919. The Canadian drinks firm Hiram Walker took control in the 1930s and immediately purchased two Speyside single malt distilleries - Glenburgie and Miltonduff - and built the Dumbarton grain distillery to help with consistency of production. At the time, Dumbarton was the largest whisky distillery in Europe. Between the mid 1960s and mid 1980s, Ballantine's grew in popularity throughout Europe and around the world. In 2005, the Ballantine's brand became part of the large multi-national drinks company Pernod Ricard, who remain the current owners.

We recently visited the Glenburgie distillery in Speyside, which is regarded as providing the 'signature' single malt for the whole Ballantine's range. Within this visit, we were honoured to have a tutored tasting hosted by Sandy Hyslop - the Master Blender for the Ballantine's range. Details of this tasting are below, as is the following short video in which Alex Robertson, the International Ambassador for Chivas Brothers, explained about the history and facts behind the Ballantine's whisky range. 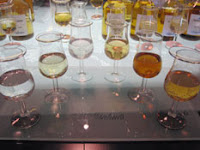 Our tasting with Sandy followed a different and very interesting format - we were presented with six glasses (as shown, left) and within these were some of the constituent whiskies that make up the Ballantine's range. Sandy had set these up in the way that he does his professional analysis, which has them all diluted to the same alcoholic strength. This was 20% ABV, which Sandy explained allows him and his colleagues to extract the maximum aroma and flavour characteristics from each whisky.

The collection of samples were as follows. From left to right, as pictured above >
Strathclyde grain new spirit (this is normally put in to casks at a whopping 94% ABV according to Sandy!) and at 20% this showed a soft, creamy character with plenty of green pear and apple, plus sugary cream soda.
Strathclyde grain 12 years old, which is only ever aged 3rd or 4th fill ex-bourbon casks to give a subtlety of flavour that will compliment to stronger single malts in the blend. This whisky is the grain base used for Ballantine's 12 years old.
Glenburgie new make spirit, which normally comes off the still at 63% ABV. This will become the signature malt whisky for the Ballantine's range and exhibits plenty of fruitiness, especially tangy citrus (lemon and lime) and interesting blackcurrant.
Glenburgie 12 years old. This is matured in first fill ex-bourbon casks to give structure and complexity to the Ballantine's 12 years old. There is not much Glenburgie single malt about, so the chance to try is rare. It was full of honey, vanilla, green apples and lightly spiced fruit cake.
Aberlour 12 years old, which is matured in first fill ex-sherry casks. This gives rich dried fruit (sultanas, raisins and candied orange peel), toffee and spice notes that gives the final blend a higher level of concentration, complexity and flavour.
Ballantine's 30 years old - the premium whisky of the range. Sandy told us that it takes a high level of cask management to get the whisky to the required quality and gave us the interesting statistic that for every bottle of 30 year old that is bottled, then the equivalent of two further bottles have been lost to evaporation during the thirty year maturation period. The whisky had a delicious mix of sweet and rounded notes - vanilla, golden syrup, peaches and tropical fruit.

Following the tasting, Sandy challenged us to try and reproduce a copy of Ballantine's 12 years old using various bottles on the table in front of us. This is much harder than you can ever imagine and we have written about the blending process recently, as we have created our own whisky for the Master of Malt - click here to read about that. Throughout the whole tasting Sandy gave us a fascinating insight in to the world of blending whisky, what happens on a day-to-day basis in his work and how he maintains the highest standards of his final product. We have put some of his comment together in another video. We hope that you enjoy listening and find it as interesting as we did. We would like to thank Sandy for his time and hospitality towards us both.

Just wanted to say I love the addition of videos to your blog. Keep them coming!

What do you think from the Ballantine´s 19 years old Rarest Reserve on ebay germany?