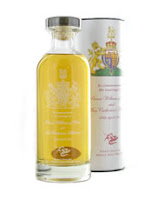 St. George's is the first whisky distillery to be built and produce whisky in England for almost 200 years. The distillery is located in the heart of East Anglia, close to the town of Roudham in Norfolk (about 2 hours north east of London). The distillery is operated by The English Whisky Company, which was founded in 2005 by Andrew and James Nelstrop. The construction of the new facilities began shortly afterwards and the first spirit came off the stills in November 2006. Legendary whisky maker Iain Henderson was employed to oversee production and he has previously managed the famous Laphroaig distillery on the island of Islay, amongst others. The St. George's spirit is made from locally grown Norfolk barley and is matured predominantly in ex-bourbon casks. The distillery has already won many plaudits for its innovation and quality.

This new release is to commemorate the Royal Wedding between Prince William and Kate Middleton. The whisky is a marriage of the English Whisky Company's peated and unpeated expressions, which have both been aged in first fill ex-bourbon casks from the famous Jim Beam distillery. In addition, there is also some whisky that has been matured in ex-red wine casks in the marriage. The Royal Wedding whisky was bottled at 46% ABV in mid March and is now available from the English Whisky Company’s online shop and numerous specialist whisky retailers … just in time for the wedding!! To order a bottle (at a cost of £65 each plus postage), go to www.englishwhisky.co.uk.

Our tasting notes
The nose is interesting and very promising. Initially there are young subtle floral, grassy (think of hay) aromas developing in to robust gristy sweet barley cereals. A hint of smoke starts to come through, reminiscent of old bonfire smoke in clothing. There are also aromas of raisin and sultana plus something damp, mossy and slightly musty that develops with more time in the glass. A lovely fresh balance is given by a slightly tangy tropical fruit note (Karen thought of banana, Matt thought mango ...). On the palate, this starts very soft and creamy with lovely notes of honey and sultana, before 'boom'! Plenty of peppery chilli-like spice and fresh wet earth hit your taste buds, followed by notes of caramel, toasted almonds and burnt liquorice. It is more 'in your face' than the nose suggested, with extra smokiness noticeably detectable (whereas the nose only hints at this). There is an interesting flow from sweet to spicy and then dry, with some lovely woody cinnamon and nutmeg notes joining in. The finish is hot, spicy and long and this smolders away for ages (we were still getting flavours - mostly the smoky notes - coming through after seven or eight minutes). This makes it lovely, tangy and refreshing with prominent notes of sweet barley, peppery bonfire smoke and woody oak dryness (and very moreish indeed!). There is a slight uneven balance between these spicier, woodier notes and the subtle sweetness that comes through with time (honey and sultana especially) ... but it's a minor thing.

What's the verdict?
This whisky is another example of the innovation and blossoming quality of the English Whisky Company. The mix of differing styles of whisky and casking works well and it has created an interesting, complex and enjoyable dram. The complexity is particularly impressive when considering the youthful age of this whisky. It confirms what we have previously said about the St. George's whisky - it seems to be getting better with age and extra length of maturation. It will be very interesting to see how it develops further. We can't wait to find out!
posted by Matt C at 4:12 PM