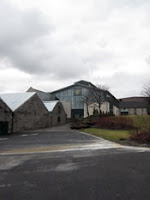 The Glenlivet is one of the most famous whisky names and brands in the world. The distillery is located in the Speyside region, close to the town of Ballindalloch in the scenic Livet Glen. It is one of Scotland's largest with an annual production of 10 million litres - this is thanks to a new extension to the distillery which was opened in June 2010 by Prince Charles and increased the old capacity by 75%. The Glenlivet is currently owned by drinks giant Pernod Ricard, who took control in 2001, and their influence has seen Glenlivet become one of the best selling single malts in the world.

The Glenlivet was founded in 1824 by George Smith, whose signature still appears on the labels and packaging. It was the first distillery in the Speyside region to be granted a distilling licence under the Parliamentary Excise Act, which was established in 1823. This Act was allegedly pushed through by the Duke of Gordon, who was George Smith's landlord and he part financed Smith to build a legal distillery on part of his land. This made Smith and the new Glenlivet distillery very unpopular at the time with the other local illicit whisky distillers, as it regularly attracted visits from Customs & Excise officers!

A small percentage of whisky produced at The Glenlivet is used in Pernod Ricard's range of blended whiskies but most is reserved for release as single malt. This range is extensive and multi-award winning, including the regular 12, 15, 18, 21 and 25 years old plus older releases, different cask finishes and exclusive bottlings for the duty free/travel retail sector. The single malt range is second for overall world sales (behind Glenfiddich) with six million bottles sold each year. It is third in the UK (behind Glenfiddich and Glenmorangie) and the best selling single malt in the USA, where it has been number one since the 1970s. 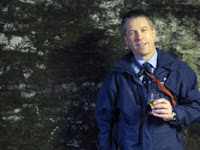 Our tour was conducted by Alan Winchester (pictured, left), the Chivas Master Distiller who oversees production at a number of the Chivas Brothers distilleries including The Glenlivet. It began rather unexpectedly with a hike up the hillside at the back of the distillery - this was to see a stone which marks the spot where the original distillery built by George Smith had stood. This blew away some of the early morning (and hangover induced!) cobwebs! Once we had negotiated a muddy track and jumped over a hillside stream (not as easy as it sounds for us city folk ...), Alan took us through some history which was peppered with interesting facts and stories - this was so enjoyable that we have decided to cover this in a separate post, which will appear shortly.

After a quick coffee stop back at the distillery in the spacious visitor centre which includes an impressive helix-shaped sculpture of Glenlivet bottles, we embark on our tour. We begin in a small room which house a Porteus mill that has previously been used to grind the malted barley at the distillery. This has part of the front section cut away so that the internal workings can be seen. This was interesting, as we have not seen this before. This room has also been fitted with an impressive old stained glass window, which a previous owner purchased from the chapel in the local village and had laid around in disrepair until it was decided to restore it as part of the recent renovations. 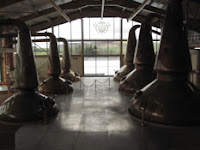 We move on in to the first part of the new extension - this is a wide, cavernous room with a high ceiling that houses a massive stainless steel mash tun on a raised mezzanine level and six copper pot stills below. The noise in here is loud and monotonous. The mash tun - the vessel where the sugars in the malted and milled barley are dissolved in warm water - takes half of the time to produce the required wort (the name of the sugary warm liquid) that the old mash tun did, which had operated at Glenlivet from the 1970s until 2009. The stills are also impressive, but we will come back to them shortly.

Alan took us through to an adjacent narrower room which ran the full length of the still/mash room. This was home to eight wooden washbacks. These are huge tanks which hold 25,000 litres of wort at a time. It is in these that the yeast is added and fermentation takes place, turning all of the soluble sugar in to alcohol over a two day period. Each of these are bubbling away at a different stage of the process and this rotation means that the stills have a constant supply of wash (the name of the final fermented liquid, which has an alcoholic strength of about 7-8% ABV). The heat in this room is stifling and it is only when you look down through the meshed suspended floor, that you see the full scale of these tanks. 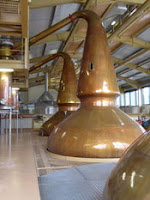 We moved back in to the still room and stood observing the stills from the floor-to-ceiling window that can be seen in the photo that is a couple of paragraphs above. Again, it is only when you are standing next to these stills that you realise the size of them, especially the larger wash stills (pictured, left). These new stills are replicas of the stills in the original, older part of the distillery and this was done so as to recreate the same style of Glenlivet spirit. The stills work in pairs with the larger wash stills receiving the wash and putting it through the first distillation. The resulting alcohol is then passed to the smaller spirit stills, where it undergoes a second distillation - it is part of this which is selected to be taken for maturation in oak casks and that will ultimately become whisky. 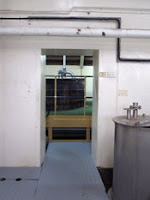 Next, we were in for a treat - Alan took us through to the old part of the distillery, which is no longer open to the public. This was equally as impressive as what we had already seen but this part of Glenlivet was in stark contrast to the shiny, slightly clinical feeling of the new extension. Everything was cramped and had a more 'lived in' and 'down to earth' feel in comparison. Paint was peeling, wood was stained by years of work and signage was functional rather than tourist-friendly. The mash tun filled the small room in which it is housed, as did the further eight wooden washbacks which were located in two different areas. The three pairs of stills are jammed in to the still room, with very little space between them and the atmosphere was hot and humid due to the confined space. 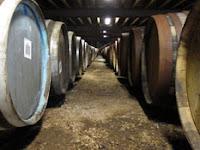 The final stage of our tour took us to one of the warehouses. The Glenlivet site has numerous warehouses, which are home to approximately 60,000 casks of maturing whisky, with the rest being matured at other Chivas Brothers sites around Speyside. The one we saw was the Cellar Collection warehouse, which is where some of The Glenlivet's premium casks are being matured and many of these are destined for single cask or limited batch releases. This is a dunnage warehouse, which is the traditional type and has earthen floors, stone walls and low ceilings. 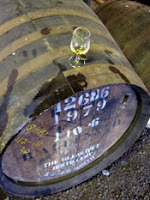 While in the Cellar Collections warehouse, we are treated to a tasting of a special whisky with Alan - this was from cask number 12686 (pictured, left) and was distilled in 1979. This was a lovely, rich whisky that exhibited deep vanilla, honey and wood spice (think of cinnamon and nutmeg) notes, as well as an extraordinary tropical fruit character (especially pineapple, mango and over ripe banana). It was a true privilege to sample this while standing in amongst so much other great whisky and we thank Alan for this opportunity, for his time and information while showing us around and his great hospitality.

If you have never been to visit a distillery or are interested in the sights and sounds of The Glenlivet, then please click below and watch the video clip of our tour with Alan. This includes footage from the new part of the distillery, the old section which is no longer open to the public and tasting that exquisite whisky straight from a 1979 cask in the Cellar Collection warehouse. We hope that you enjoy watching ...