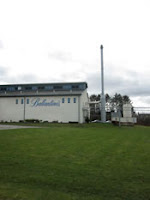 Glenburgie (pronounced glen-burg-ee) is a distillery located in the Speyside whisky region of Scotland. It sits just off the main Aberdeen-Inverness road, outside of the town of Forres. The current owners are Chivas Brothers, part of the larger Pernod Ricard group, and they took control of Glenburgie in 2005. The whisky produced at the distillery is one of the major single malts used in their famous Ballantine’s blended whisky range. Ballantine’s is the second best selling whisky brand in the world, behind the Johnnie Walker range, and sells a staggering 70 million bottles a year! Glenburgie has been the ‘signature’ single malt used in Ballantine’s since 1935, when the brands owners purchased the distillery so as to secure a regular and consistent supply.

Glenburgie was founded in 1810 by William Paul and was originally named Kilnflat. However, the production of whisky did not officially start until 1829 when Kilnflat was granted a license. The distillery was renamed Glenburgie-Glenlivet in 1878 by Charles Hay, who had reopened it following a period of closure. Glenburgie has changed ownership a number of times since then, including Hiram Walker and Allied Lyons which were later taken over by the Pernod Ricard group. A major refurbishment of the distillery took place in 2004, with the only original parts remaining being the Old Customs House (which is now a tasting facility) and some of the warehouses.

Our visit to Glenburgie was hosted by Alex Robertson, the International Brand Ambassador for Chivas Brothers. We began on a massive expanse of lush lawn in front of the distillery, where Alex gave us a brief introduction to the distillery including a few facts and figures detailed above. This is followed by a walk over to one of the water sources nearby. In this tranquil spot, Alex explained that the water used at Glenburgie is taken from five sources - it either rises from local springs and flows in a number of small streams to reach the distillery (as pictured, left) or comes via a borehole close by. 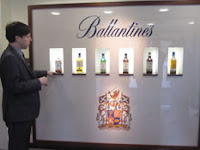 Alex then moved us inside the distillery in to a small welcoming hall, which shows the six bottles in the current Ballantine’s range – the Finest and Limited, plus the four age statements of 12, 17, 21 and 30 years old. We have recently written a post detailing the Ballantine's range - click here to read this. He then takes us upstairs, via the Porteus mill which remains from the original distillery, to a large room with impressive views of the surrounding countryside. Here, it is explained to us about the different strains of barley that are used and what they look for to give the required characteristics to their whisky.

On moving back downstairs, we were greeted by Neil Corbett - the Distillery Manager of Glenburgie. Neil is an Englishman from the West Midlands, who learned his trade in the brewing industry. He went on to walk us around the interior of the distillery, which is housed on one level in one massive space, beginning with the mash tun. This is where warm water is added to the milled barley (known as grist) and the soluble sugars are extracted. The final sugary liquid is called wort. At Glenburgie, the copper domed mash tun can hold 7.5 tonnes of barley and after a five hour cycle, this will yield approximately 35,000 litres of sugary wort. This liquid then moves on to the fermentation stage, as do we. 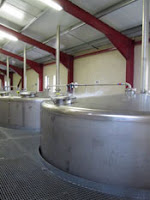 Neil took us through to see the washback tanks - these are the large vessels in which the fermentation process takes place. Glenburgie has 12 such tanks and were all new at the time of the renovation. They are made of stainless steel and each tank is at a different stage of Glenburgie's 52 hour fermentation cycle. Liquid yeast is added to the sugary wort and it then gets to work on turning all of the soluble sugars in to alcohol. This process generates plenty of heat and carbon dioxide, giving this area a slightly unpleasant feel. Once the cycle is complete, the result is a strong beer-like liquid with an alcoholic strength of approximately 8% ABV - this is called 'wash' and it is this which progresses to the distillation stage. 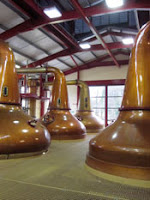 Four of the stills in Glenburgie's impressive still room have been kept from the old distillery, with the addition of two further stills. These six stills produce 2.6 million litres of spirit per year, all of which is destined for blending. The distillation is completed in two parts. The first part is where the wash is heated and distilled in a wash still and produces a final liquid with an alcoholic strength of 28-30% ABV. The second sees this liquid distilled again and the desirable part or 'cut' (at most distilleries this is around the 65-70% ABV mark) is then collected. It is this final 'cut' which is put in to wooden casks and matured to become whisky.

The still room at Glenburgie is very impressive, as indeed is all of the facility, and it has another interesting feature - thermal compressors are attached to the condensers on the lyne arms. This makes Glenburgie one of the most highly energy efficient distilleries in the Scottish industry as much of the heat from the condensation stage of distillation is recycled and put back in to the system.

The majority of the spirit produced at Glenburgie is filled to ex-bourbon casks for maturation so as to create that 'signature' malt whisky for the Ballantine's blended range. The site is home to four dunnage warehouses (the traditional type with stone walls and earth floors), plus four other racked/palletised ones. The remainder of the stock is matured at other sites which are owned by Pernod Ricard and are dotted around the Speyside region. After a quick walk around one of the dunnage warehouses with Alex, we are taken to the Old Customs House for a whisky tasting and further information about the Ballantine's brand with Sandy Hyslop - the Master Blender of Ballantine's for Chivas Brothers. Click here to read our recent post covering this session.

We thought that we would share some of the sights and sounds of Glenburgie with you, plus insight and facts from Alex and Neil, in the film below. We hope that you enjoy watching and seeing inside a little known but very important distillery, which is not open to the public. We thank Alex, Neil and Sandy for their hospitality, time, information and for making our visit to Glenburgie so enjoyable and memorable.