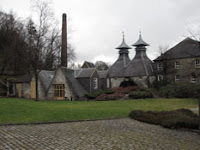 Strathisla (pronounced strath-eye-la) is one of the oldest whisky distilleries in Scotland. It was founded in 1786 by Alexander Milne and George Taylor, and was originally named Milltown – it did not become Strathisla until 1870, although this was later changed again to Milton, before reverting to Strathisla in 1951. Despite not being the oldest (both Glenturret and Bowmore were founded before it), Strathisla boasts the longest continuous production of any distillery in Scotland – Bowmore and especially Glenturret have been closed and restarted during their histories.

The distillery is widely regarded as one of the most picturesque in Scotland and is located in the market town of Keith on the eastern side of the Speyside region. It sits on the banks of the River Isla, which runs through the town and it is this that gives the Strathisla its name and some of its water supply. The original water wheel can still be seen at the distillery and this used to power every part of the whisky production process. Strathisla has been owned by Chivas Brothers since 1950 and is one of three distilleries in Keith. The others are Glen Keith, which is almost next door and is also owned by Chivas Brothers but has laid dormant since 2000, and Strathmill, which is owned by Diageo. The facilities at Glen Keith are currently being used as one of Chivas’ main research centres.

Much of Strathisla’s annual production of 2.5million litres is used for the hugely popular Chivas Regal blended whisky range, which is in the top five for total world whisky sales. The whisky from Strathisla is regarded as the ‘heart of Chivas Regal’ and forms an influential part of the blend. The distillery is also marketed as ‘the spiritual home of Chivas Regal’. A relatively small percentage is released as single malt and the current range consists of a 12 years old, plus a limited 15 years old at cask strength. Strathisla can be found through the independent bottlers, although these are also fairly rare.

Our visit to Strathisla was hosted by Alex Robertson, the International Brand Ambassador for Chivas Brothers (pictured, left). When we arrived, it was easy to see why this distillery has the ‘most picturesque’ tag – it looks gorgeous, even on a grey March afternoon. We begin with a walk down the main driveway and in to the entrance of the visitor’s centre. This is largely geared towards promoting Strathisla as ‘The heart of Chivas Regal’, rather than the single malt and everything is labeled as such. Once inside, the interior is plushly furnished and littered with old pieces of memorabilia and nick-nacks from the distillery and Chivas brand.

We move briefly outside again in order to get to the milling room and this allows us another look at the exterior of this beautiful distillery. The old Porteus mill has been there for decades and still puts in shifts of around five tonnes of malted barley at a time. The mill grinds the barley in to three different gradings - coarse, middles and fines. This is done so as to maximise the amount of soluble sugar that is extracted later in the process and the mix of the three is called grist. Each distillery has its own ratio, but most play within certain parameters - if they have a too high percentages of fines, then when the water is added later the grist will stick together. Conversely, a higher percentage of coarse means that the water will drain through too quickly. Strathisla's grist percentages are around 24% coarse, 65% middles and 11% fines.

As we go upstairs to see the mash tun, which has an impressive copper dome, and it becomes clear that Strathisla is not just quaint from the outside. The interior has the same feel and you get the impression that everything is going to be tight, compact and on top of each other. The mash tun is where warm water is added to the grist so as to dissolve the soluble sugars in the grain. This is done four times at Strathisla, with the temperature of the water being increased each time. This maximises the amount of sugars that are dissolved, with some of the final batch being taken and used to kick start the next first batch. The four temperatures are 65.5°C, then 76°C, 84°C and finally 93°C. The final liquid is called wort. 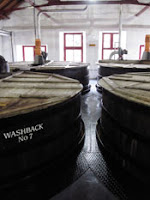 Next, Alex takes us through to the fermentation area, where the sugary wort from the mash tun is converted in to an alcoholic liquid. This takes place in huge containers called washbacks, which in the case of Strathisla are made out of wood. This is the traditional material for washbacks, although many distilleries now have stainless steel ones. Here, the liquid yeast is added to the wash and the reaction turns the soluble sugars in to alcohol. This takes 48 hours at Strathisla and they have 10 washbacks, all of which are at different stages of the fermentation process. The end product is a beer-like liquid, called wash, that has an alcoholic strength of 7-8% ABV and the whole room is warm and filled with the smell of malty beer with an edge of carbon dioxide, the by-product of fermentation. 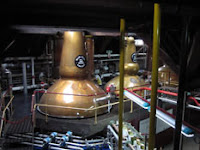 We move through to the still room, which has to be one of the most characterful and idiosyncratic in the Scottish whisky industry. The four stills are lined up and they are crammed in to a steep gabled roof, along with all the pipework. This room is the one directly below the chimney in the photo at the start of this post and it is not until you see this exterior that you realise that the still room is slightly below ground level. The claustrophobic feeling is exaggerated by the wooden roof (another rarity, especially given the current health and safety laws!) and the lyne arm of each still are slightly different to the next one, so as to fit within the shape of the roof! The room is warm and humid, as both pairs of stills are in operation and the noise is hard to describe. 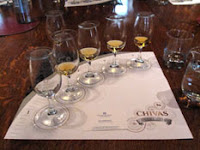 After a quick look at the spirit safe, where the final spirit is assessed and collected from the stills, we move outside to the welcome cooler air. We walk passed the old water wheel, which used to power the whole distillery, across the clipped lawn and back in to the visitor's centre. We are taken through to a very impressive wood paneled room, where we take part in a Chivas Regal whisky tasting tutored by Alex. The details and tasting notes of this are in a separate post which you can read by clicking here. It was very interesting to taste not just the Chivas Regal range (aged at 12, 18 and 25 years) but also two of the important constituent parts of the blend - Strathisla (new make spirit straight from the still and the 12 years old) and a grain whisky from Chivas' grain distillery of Strathclyde. 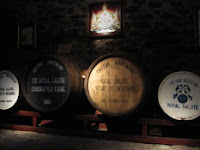 The final stop of our tour contained a real treat. We were shown around one of the warehouses (Warehouse No.3) at the distillery - there are only three warehouses on the site, with the rest of the whisky being matured in other facilities around Scotland. Within this warehouse we were allowed in to the Royal Salute Vault - a double padlocked cage that contains some very special whisky indeed. The Royal Salute is a premium blended whisky that is produced by Chivas and we were amazed to be offered a dram of a highly rare version of this, which was 38 years of age and named Stone of Destiny. This treat was the final act in our tour of Strathisla, a distillery which oozed charm, character and class.

In order for you to see some of the sights and sounds of Strathisla, we have put together a short film in what is our first foray in to the world of video. The camera work is a little shaky, but hopefully that will improve with practice! Hopefully the film will give you an insight to the distillery and give you the chance to listen to Alex Robertson explaining about it. We hope that you enjoy.

Just a small comment... Keith has one more distillery called Strathmill and it is about 500 meters from Strathisla

Thanks Nick - you are right and I have now changed the article. Cheers,