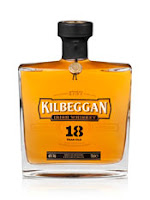 Kilbeggan is an Irish whiskey that is currently produced by the award winning company of Cooley. It is made at a distillery in the town of Kilbeggan, which lies in the centre of Ireland in County Westmeath. The name of Kilbeggan is derived from the Irish Gaelic Cill Bheagáin, which translates as 'the church of Bécán'. St. Bécán was an Irish monk who founded a monastery on the site of the current town in the 6th century.

This 18 years old is a new release that follows on from the highly successful and multi-award winning Kilbeggan 15 years old. This is a small batch release of just 4,000 bottles which come from premium casks that have been specially selected by Noel Sweeney, the Master Blender for Cooley. It is bottled at 40% ABV and will retail around the £80-85 mark.

The Old Kilbeggan distillery was founded in 1757 by the McManus family and the current distillery stands on the original site. The location was chosen for three reasons - the abundant water supply from the adjacent River Brosna and the proximity to both the prosperous local grain fields and peat bogs. The distillery suffered because the Irish whiskey market collapsed due to a combination of the Irish War of Independence (1916-1921) and Prohibition in the USA (1920-1933) - it was forced to close in 1957 in its 200th anniversary year. It was not to reopen for another 50 years ...

The Old Kilbeggan distillery and its whiskey recipes were purchased by Cooley's founder John Teeling in 1988. He started Cooley in 1987 and his remit was to revive the old traditional whiskies that had fallen by the wayside during the difficult times. Kilbeggan's distillery buildings had been maintained during its dormant period by local historians and Teeling decided to renovate it and restart production on the site. Meanwhile, whiskey using the Kilbeggan recipe (such as this 18 years old) was being produced at the Cooley distillery in County Louth, between Dublin and Belfast. Whiskey production restarted at Old Kilbeggan in 2007.

Our tasting notes
This has a rich golden colour with a hint of amber and the nose is rich, fragrant and expressive. The initial aromas include plenty of vanilla, honey and bittersweet cereal grains. The vanilla really packs a punch and quickly becomes the prominent feature. Other aromas are present - a powerful hit of fresh oak (think of wood shavings), coconut, toasted almonds and some late developing wood spice (imagine cinnamon). On the palate, this has an initial freshness (this has a citrus-like edge, which is reminiscent of orange oil) and this gives way to a lovely creamy richness, which is driven by notes of vanilla, coconut, toffee and honey. Then comes further oak (think of those fresh wood shavings again), distinct bittersweet cereals and toasted oat notes - these add plenty of body to the palate, which grips the taste buds. Finally, the complex palate is completed by some robust woody spices (imagine cinnamon, nutmeg and cedar wood) and these add further grip. The finish is long and lingering with an abundance of bittersweet woodiness and spiciness that gives way to notes of bitter orange and honey. This leaves the mouth watering and wanting more!

What's the verdict?
The Kilbeggan 18 years old is another excellent release from Cooley. The balance of the sweet and spicy elements, combined with the bitter cereals, richness and complexity make this a delicious and interesting whisky. It is vaguely reminiscent of a sympathetically aged older bourbon, so if you like those then try this. The spice and bitterness may be a little much for some palates but it is worth persevering with. Or maybe add some water, which brings out increased creaminess and vanilla. This will surely follow on from its 15 years old sibling and rack up the awards.
posted by Matt C at 12:03 PM

I bought a bottle of this at Stratford Whisky Festival a few weeks ago, what an amazing drink ?