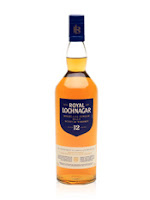 The Royal Lochnagar distillery was founded in 1845 and is currently owned by Diageo.  It is the smallest of the 28 single malt distilleries in their portfolio and has an annual production capacity of just 450,000 litres.  The distillery is located in the Deeside region of the east Highlands, close to the hamlet of Crathie and Balmoral Castle.  It was originally named New Lochnagar after the first distillery, which was located on the other side of the River Dee, was destroyed by fire in the early 1840s.

A Royal Warrant was issued by Queen Victoria in 1848, after she visited the distillery and this allowed it to be called Royal Lochnagar.  It is rumoured that the single malt from there was her favourite.  The current single malt range from Royal Lochnagar is small, as the majority of the whisky produced there is used in Diageo's vast portfolio of blended whiskies. Older casks in particular are earmarked for use in their premium and super premium blends, such as the iconic Johnnie Walker Blue Label.

This 12 years old expression is the cornerstone of the range and is joined by two more limited releases - the Distillers Edition which is part matured in ex-Muscat casks and the Select Reserve which is produced in small batches from some of the best and most exclusive casks from the distillery's stock.  The 12 years old is matured predominantly in ex-European oak casks and is bottled at 40% ABV.  A bottle should cost around the £35 mark.

For more details about Royal Lochnagar and some photos of the distillery, please read my recent Distillery Visit blog post.

Our tasting notes
The colour is golden yellow with a hint of amber and the nose is simple but very pleasant.  There are immediate aromas of toffee, malty cereals and dried orange peel.  Underneath is some sweetness and fruitiness in the form of honey, vanilla, raisins, dried apple and coconut.  There are also hints of wood spice (think of cinnamon especially), dried grass and a faint whiff of earthy peat smoke.

On the palate this whisky is soft and velvety, especially once an initial slightly bitter orangey tang subsides.  There are again plenty of toffee and sugary malted barley cereal notes, which combine well with other fruity and nutty characteristics to add depth - think of raisins, green apple, candied oranges, coconut and caramelised almonds.  As time goes by some more subtle notes can be detected, most notably wood spices (imagine cinnamon, liquorice root and ginger powder) and vanilla (this seems to increase towards the finish).  These are joined by further hints of earthy peat smoke and a slightly tannic/sour dried grass characteristic - these give a lovely complexity to proceedings.

The finish is interesting and of decent length.  It is interesting as it has evident sweetness in the form of toffee and a distinctive maltiness, but the wood spices and more bitter elements (the orange zest and dried grass in particular) are much more prominent than on the nose or palate.  This makes it drier than expected.  The result is a delicious whisky that makes you want to take another sip.

What's the verdict?
The Royal Lochnagar 12 years old is a whisky that would be good for a beginner and connoisseur alike.  As stated, it is quite simple but some more complex characteristics do lurk beneath the surface if you are prepared to give it time.  It is a very pleasant, under rated and easy drinking single malt that offers decent value for money.

On my recent trip to the Royal Lochnagar I was served this 12 years old as an aperitif drink before dinner, chilled from the freezer.  This worked very well and was extremely refreshing - the maltiness and orange notes in particular seemed to stand out well.  Give it a go and see what you think ...