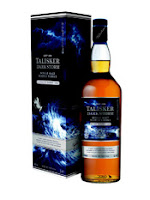 This is a new single malt that has been released as an exclusive for the travel retail sector.  The Talisker Dark Storm is the sibling to the recently released Talisker Storm, which has already gained many plaudits and good reviews (click here to read our review of that). The difference is that Dark Storm has been matured in heavily charred oak casks, which adds an extra intensity and spiciness, and it is being marketed as the smokiest ever single malt from the iconic distillery.

Talisker is located on the isle of Skye, the largest and most northerly island of the Inner Hebrides. It is the only distillery on the island and is found close to the village of Carbost, in the shadow of the imposing ancient Cuillin hills. Despite its remote location it is one of the most visited distilleries in Scotland with over 60,000 visitors per year, and this has led to a newly revamped visitor centre being built and opened this year at the cost of £1 million. For more information on tours - visit Diageo's informative website www.discovering-distilleries.com.

Talisker was founded in 1830 by two local brothers, Hugh and Kenneth MacAskill, and has a current annual production capacity of 2.6 million litres. Talisker is currently owned by Diageo and they have given the brand plenty of promotion over the last two or three years. The result is that worldwide sales have risen by over 100% in the last five years and it is now Diageo's best selling single malt behind only the Singleton range (which includes the Dufftown, Glendullan and Glen Ord distilleries) and Cardhu.

The Dark Storm is bottled at 45.8% ABV, as most of the Talisker range is, and will retail at £42/€50 for a one litre bottle.  Dark Storm is available now in travel retail stores across Asia, Europe and the Middle East.

Our tasting notes
The colour is golden amber and the nose has an instant interesting mix of rich, earthy smokiness (this is reminiscent of coal tar soap or freshly laid tarmac), bittersweet malty cereals and barley sugar.  The smoke catches the nostrils and has a peppery chili-like edge to it.  As these aromas fade a little, others come through - think of vanilla, honeycomb, caramel, fresh green apple, sultanas and a hint of candied orange and brine.

On the palate, this is initially quite acrid and slightly bitter with a woody, almost charcoal-like edge.  the result is drying and the similar peppery chili note from the nose exaggerates this.  These notes are again reminiscent of hot tar, as on the nose, and wet earth.  After this first blast, the whisky develops in an interesting way and just in time too.  Some much needed sweetness comes through in the form of butterscotch, vanilla, golden syrup, malted barley plus some dried fruits (think especially of raisins, sultanas, candied orange and apricots).  Two lovely notes appear towards the end and work well hand in hand with the others present - salted caramel and toasted nuts.  A final sprinkle of earthy ginger powder completes the jigsaw.

The finish is long and smoulders away for ages.  The initial sweetness (the barley, honey, syrup and fruit) fade first, followed by the notes of salted caramel and toasted nuts.  It is the warming, acrid and spicy smoke that lasts longest.  This has an ultimately drying effect, which makes you want to reach for a sip of water or another sip of the whisky ...

What's the verdict?
We liked the Talisker Storm but we really like the Talisker Dark Storm.  It seems to have more depth, smokiness and complexity than its sibling.  It is feistier and more brash and is essential the Storm on steroids.  The heavily charred casks have contributed significantly to the aromas and flavour and beefed everything up.  It is delicious and should suit anyone who enjoys a good smoky, peaty whisky.

Our next challenge is to do a tasting of both the Storm and Dark Storm side by side before we finish our samples off!  It seems that we may well have lost £42 the next time that we are travelling through an airport ...