Within Inbox we aim to write a few lines detailing each press release/piece of news/PR event that we have received and provide links, where possible, for you to find out further information.  There's a bit to get through, so here is the news that has attracted our attention this week ... 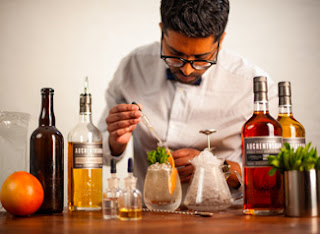 The innovative Lowland single malt brand of Auchentoshan, which is owned by Morrison Bowmore Distillers, has announced its latest consumer interactive experience in its Auchentoshan Presents series - The Taste Experiments. The events, which will be held in London and Glasgow over the coming weeks, aim to bring some unique and unusual to a traditional whisky tasting and tap in to the growing consumer thirst for experiences that combine science, education, fun and imagination.

They have been created by a collaboration between Rachel Barrie, the Master Blender for Morrison Bowmore, cocktail guru Ryan Chetiyawardana (pictured, above), coffee and taste experts DunneFrankowski and food experimentalists Rebel Dining Society.  The dates for the Glasgow event will be announced shortly, but the London event is next week on the evenings of 24 and 25 July.  Tickets can be purchased for £15 each via www.eventbrite.com - hurry up though as spaces are limited ...

Benriach - Oldest ever release
The independently owned Speyside distillery has announced the release of its oldest ever single malt - the Benriach 1966 Vestige.  The name represents the fact that this is something special, a moment in time, that can never be replaced . This is a single cask bottling from one of the oldest remaining casks in Benriach's warehouses.  It was filled to an ex-bourbon hogshead in September 1966 and has been bottled at 44.1% ABV after 46 years of maturation.  There are just 62 bottles which will retail at £3,999.99 each. 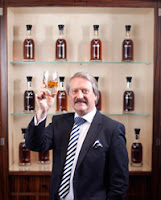 Dalmore - Rare collection unveiled
The premium Highland single malt brand of Dalmore has teamed up with luxury retailer Harrod's to offer a unique set of whiskies - the Dalmore Paterson Collection.  The set consists of just 12 bottles, each whisky of which has been hand selected and nurtured by Dalmore's Master Blender Richard Paterson, and carries a cost of £987,000.  They are housed in a bespoke cabinet in the newly refurbished Fine Spirits room at Harrod's.

The 12 whiskies have been selected from some of the rarest stocks maturing in Dalmore's warehouses.  The oldest was distilled in 1926 and the youngest is from the early 1990s, and each bottling has been named after a person that has influenced Paterson throughout his illustrious 42 year career - these include his father and grandfather plus the founders of Dalmore's owners Whyte & Mackay, James Whyte and Charles Mackay.  The Paterson Collection are each bottled in lead crystal decanters designed by Glencairn Crystal and these include silverwork and engraving by luxury jeweller Hamilton & Inches.  It also comes with a 200 page hand written leather bound book in which Paterson has documented each whisky and the selection process. 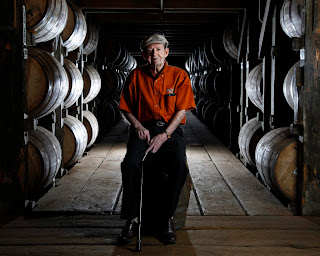 The bourbon industry has lost one of its legendary figures this week after the announcement of the death of Elmer T. Lee, the former Master Distiller at the Buffalo Trace distillery.  He died following a short illness on Tuesday, aged 93.  Lee served in the US Air Force during World War II before beginning in the bourbon industry in 1949 with a job at the George T. Stagg distillery.

He became Distillery Manager in 1969 and is renowned for launching Blanton's, the world's first ever single barrel bourbon, in 1984.  He retired in 1985 and has continued to serve as an ambassador for Buffalo Trace.  He was honoured in 1986 with his own single cask bottling, named Elmer T. Lee, which he had continued to select each individual cask for right up until his death. 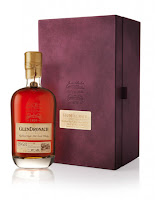 Glendronach - Also release oldest ever malt
Benriach's sister distillery of Glendronach have also announced the release of their oldest ever single malt - the Glendronach 1968 Recherché.  As with the Benriach release it is a single cask chosen from some of Glendronach's oldest maturing stock.  It is so named as recherché means 'sought out' in French.  This is a single ex-Oloroso sherry butt, which was filled in September 1968, and it has yielded 632 bottles.  It has been bottled at 48.6% ABV and will cost £2,749.99 a bottle.

The work by Inver House's Master Blender Stuart Harvey in the blending lab to create this 1920s inspired whisky is complimented by the packaging design, which has taken elements from the original bottle.  This includes a black glass bottle, period lettering and the old Hankey Bannister logo and crest.  The Heritage Blend will be available globally, although numbers are limited to just 5,000 cases (that's 30,000 bottles to me and you), and the recommended retail price is £25.

Hankey Bannister's Brand Manager Lynne Buckley comments, "To have the opportunity to bring to life an authentic part of the whisky’s history has been an enormous pleasure. We are very fortunate that someone back in the 1920s decided to store this bottle for posterity – and that it was in such good condition 90 years after bottling. Stuart Harvey has done a great job in creating a blend that is true to the taste and style of the antique whisky whilst also being a wonderful dram for modern day whisky drinkers."