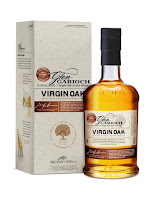 This whisky is an innovative new limited edition expression from the up-and-coming east Highland distillery of Glen Garioch. The Virgin Oak is a rarity amongst single malts as it has been fully matured in virgin ex-American white oak casks and offers something new to the brand's ever expanding range. Speaking recently to Rachel Barrie, the Master Blender for Morrison Bowmore Distillers (the owners of Glen Garioch), she revealed that they have been experimenting at the distillery with these casks and the first were laid down for maturation in 2000.

Glen Garioch (pronounced glen-geery) is located in the village of Oldmeldrum, which is found between Inverurie and Aberdeen in the east Highlands. It is one of the oldest distilleries currently in operation in Scotland, having been founded in 1797 by Thomas Simpson. As mentioned the distillery is currently owned by Morrison Bowmore, who are part of the larger Japanese company of Suntory, and is relatively small with an annual capacity of around one million litres. Morrison Bowmore re-opened the distillery in 1997 and they have established Glen Garioch as a single malt for connoisseurs.

The new Virgin Oak expression is limited to just 6,000 bottles worldwide in the initial batch, with just 720 bottles allocated to the UK market. It has been bottled at 48% ABV and is non-chill filtered. According to Rachel Barrie further batches are planned but this will be as and when the maturing stocks are ready and available.  The Virgin Oak will be available in specialist whisky retailers from the beginning of August at a recommended retail price of £69.99.

For more information on Glen Garioch, please visit www.glengarioch.com or read the report of Matt T's recent Distillery Visit there.

Our tasting notes
The colour is a vibrant golden yellow and the aromas on the nose are equally as vibrant and very fragrant.  There is an immediate hit of vanilla, coconut and wood spices (think of cinnamon sticks especially) and these are backed up by further aromas - imagine orange zest, fresh ginger, buttered popcorn, milk chocolate and a hint of maraschino cocktail cherries.  There is also a whiff of distant wood smoke.

On the palate, this is as vibrant and fresh as the nose suggests.  It is initially very woody and packed with plenty of spices - thick of a combination of freshly sawn oak, dried coconut, cinnamon bark and toasted Indian spices such as garam masala and cardamom.  Then some expressive other notes begin to appear in the form of dried orange zest, vanilla, honey, green apple and hints of ginger and cocoa powder.  The whisky warms the mouth and it sends the taste buds into over drive.  It coats the mouth and the intense spiciness is never far away, lingering to give a lovely mouth watering feeling.

The finish has some pleasant barley sugar sweetness although the intense and drying woody spices take over.  These linger for a decent length of time before fading to reveal a very late hint of orange oil.

The intensity that this whisky has drawn from the virgin oak casks lends itself to adding some water.  A few drops pull the spiciness back a lot, although we added more and this started to allow some of the other aromas and flavours to shine through. It becomes softer and sweeter on the nose and palate, and feels creamier in the mouth.  Some lovely butterscotch, coconut milk and apple notes really come to the fore, along with a hint of candy floss.

What's the verdict?
This is a whisky that we grew to like, rather than instantly liking.  The general consensus amongst those at the London launch event was that it was a very spicy and quite challenging whisky on first impressions.  However after a few more sips and as the senses got used to the intensity, the opinions started to mellow.

The addition of water is probably necessary and really allows the more subtle notes from the virgin oak casks to come through, rather than just the slightly brash and obvious ones.  It softens and balances the whisky making it very pleasant and enjoyable to drink.  It makes us wonder what other interesting experiments that innovative distilleries such as Glen Garioch may have up their sleeves ...