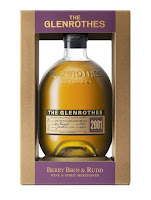 This whisky is the latest in the highly acclaimed Glenrothes Vintage series.  It has been constructed by Gordon Motion, the Malt Master for the distillery's owners Berry Brothers & Rudd, from a selection of casks. All were distilled in 2001 and the whisky has been designed to have "soft, stimulating and conversational properties". It will appear in the Asian market, where it will be bottled at 40% ABV, and the European and US markets where it will be 43% ABV. A bottle will cost £45, €55 or $67 USD.

Glenrothes is located in the town of Rothes in the Speyside region and has a current capacity of 5.5 million litres per year.  Despite its size Glenrothes remains fairly unknown, as the majority of the whisky produced is used in the famous blends of Famous Grouse and Cutty Sark. The distillery was founded in 1878 and has had its fair share of bad luck - two bad fires in 1897 and 1922, plus an explosion in 1903. Berry Brothers, who had strong links with the distillery in the past, were involved in the first release of Glenrothes as a single malt in 1987 and have been ever since.

The single malt range was revamped around five years ago with Berry Brothers promoting Glenrothes more than ever before. As a result, the sales, reputation and awareness of the product are growing all the time. The restyling included the distinctive bulb shaped bottle, cardboard package frame and the whiskies being labelled as 'vintage's rather than of a certain age statement. The core range now includes the popular Select Reserve and numerous evolving Vintages, with each date referring to the year of distillation.

Our tasting notes
The colour is golden yellow and the nose is fragrant and packed with some lovely aromas.  The initial notes are of sweet malty cereals, butterscotch and toffee, sultanas and candied orange peel.  Underneath are further aromas of vanilla, honey, demerara sugar, stewed apple with cinnamon and nutmeg.  It feels warming and very promising ...

On the palate this whisky feels much lighter than expected.  The nose suggests a richer and rounder texture.  The first notes to hit are a distinct tangy one of lemon zest, plus sweet vanilla and some floral heather honey.  Then the malty notes begin to come through and add a creamier element to the mouth feel and a slight pleasant bittersweet edge.  Other characteristics then begin to appear and combine to give more complexity - think of dried apple, crumbly brown sugar, butterscotch, orange oil and juicy sultanas soaked in kirsch cherry brandy.  The final piece of the jigsaw are some warming wood spices, especially cinnamon and nutmeg.

The finish is reasonably long and driven by a combination of the drying wood spices and the sweeter, sugary notes.  The spices, and the cinnamon in particular, remain prominent throughout and are joined by the slightly bittersweet cereals as time goes on.  The honey and brown sugar notes are also prominent and a final hint of candied citrus finishes things off nicely.

What's the verdict?
This 2001 Vintage is another lovely offering in the Glenrothes series.  It sets out to be a rich, sweet whisky on the nose but then is light, fresh, zesty and sweet on the palate, with a spicy/sweet finish.  These characteristics make it feel like an ideal Summer single malt and one which is very enjoyable to sip an evening away on.  It is also not too badly priced at £45 a bottle - well worth checking out we think ...

eToro is the ultimate forex broker for rookie and pro traders.