Angel's Envy - New distillery planned
The Louisville Distilling Company (LDC), the owners of the Angel's Envy bourbon and rye whiskies brands, have announced plans to build a new distillery facility in Lousville, Kentucky at a cost of $12 million.  It will be built in a former fabric factory in the centre of the town and will include a distillery, including all parts of the production process apart from maturation, and an interactive visitor centre.

The LDC currently source their whiskey from another distillery and the aim is to produce their own stock via a multi-storey column still, which will have a capacity of 30 casks of new make spirit per day.  The distillery has been designed by Louisville based architects Joseph & Joseph. It will create 40 new jobs and is expected to be fully operational by December 2014. 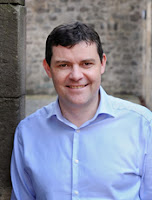 Arran - A very happy 18th birthday
Isle of Arran Distillers, the owners of the Arran distillery, have celebrated the recent 18th anniversary of the distillery opening by announcing record profits.  This is coupled with its best year to date for export sales and total sales.   They have announced net profits of +40% and total sales totalling over £3.5 million for the first time.  This has been fuelled by a 20% increase in export sales in 2012, which has seen the number of importers in countries such as Denmark and the USA rise dramatically.

Euan Mitchell (pictured, above), the Managing Director of Isle of Arran Distillers, comments “As we celebrate our 18th birthday the business is going from strength to strength. We are developing a portfolio of products to match any distillery which is reflected by the growing interest for The Arran Malt around the world. We are in the ideal place to benefit from the increasing global awareness and taste for premium Scotch malt whisky. We’re currently exporting to over 35 countries and we hope to add a number of new export destinations this year.”

Johnnie Walker - Resurrect an icon
The world leading Johnnie Walker brand has resurrected martial arts film legend Bruce Lee in their latest advertising film for the super premium Blue Label blend.  Lee, who died 40 years ago in July 1973, appears with the help of computer graphics on a modern city balcony in Hong Kong.  The film, entitled Hail to the Game Changers, was created by Chinese agency BBH and was directed by Joseph Khan, who used Lee's daughter Shannon in an advisory role.  The ad has been launched in China and has caused controversy amongst fans, as Lee was a well known tee-totaller.  A global launch is planned for later in the year.

posted by Whisky For Everyone at 8:55 PM