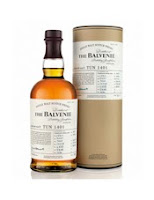 The latest whisky in Balvenie's highly acclaimed Tun 1401 series has arrived. The series has won many plaudits across the globe, with different batches being released exclusively in different markets including the UK, Europe, the USA and travel retail. Each batch is created by the legendary Malt Master David Stewart, a veteran of over 50 years at Balvenie.  After selecting the casks, he puts them together in a huge oak vessel called a tun (in this case Tun No. 1401) and the different whiskies marry together over time.  This process takes roughly three months. 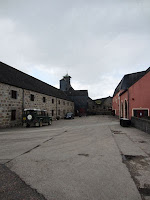 The Balvenie distillery (pictured, left) is located in Dufftown, a town in the famous Speyside whisky region of Scotland. It was founded in 1892 by William Grant and is built next to its sister distillery of Glenfiddich. Balvenie is owned by William Grant & Sons and has an annual production capacity of 5.6 million litres. It is regarded as one of the most traditional distilleries in Scotland, as all stages of the whisky making process happen on site in one form or another - this includes growing barley, malting, mashing, fermentation, distillation, coopering and maturation.

As with the previous releases, the Batch #8 has a limited number of bottles available - there are just 2,500 this time with most going to the UK market.   This is the highest number of any batch, but has been created using only 12 casks - nine American oak and three European oak.  The oldest cask was filled in 1970 and the youngest is from 1991.  It is bottled at the natural cask strength of 50.2% ABV and the retail price is around the £220 mark for a bottle.

This year the launch for the Tun 1401 was held at The Balvenie Fete, an interactive consumer experience held in Tavistock Square in central London.   To see some pictures from this, please visit the Balvenie Fete album on our Facebook page.

Our tasting notes
The colour is a dark golden amber and the nose is fragrant, rich and expressive. There are immediate aromas of warm butterscotch, peaches, dried apricots and beeswax.  Underneath is a complex mix of notes including milk chocolate, dried mango, rum and raisin fudge, vanilla pods, cedarwood, ginger root, cinnamon bark and a hint of menthol and liquorice.  It smells very promising indeed.

On the palate, the whisky feels velvety, viscous and opulent.  There is an initial fruity quality to the notes present - think of raisins, dried mango and peach, dates, green apples and a hint of bitter orange - and this enables the whisky to feel juicy and vibrant.  The notes that follow are reminiscent of honey, ginger cake and golden syrup tart, and these add a wonderful combination of warm spice and sweetness.  Further depth is added by a luscious note of toffee or butterscotch sauce, which are enhanced by a selection of woody spices - imagine cinnamon, nutmeg, ginger powder and a hint of star anise and cloves.

The finish is lengthy and just seems to go on and on, evolving as it progresses.  The sweet and fruity notes lead the way - especially the vanilla, honey, dried fruit and peach elements - and as these begin to fade, the woodier and spicier notes come to the forefront.  The ginger and cinnamon notes are particularly evident and have a warming quality.

What's the verdict?
The Batch #8 is a silky and classy whisky, and one that carries on the consistently high quality of the Tun 1401 series.  It sits comfortably alongside the other two expressions that we have sampled to date - the Batch #2 and Batch #5.  This whisky deserves to be sipped and savoured, and it feels like a real treat to drink.  We cannot wait for the next releases in this series and neither can consumers by all accounts.  If you fancy one, snap it up quick before all of those 2,500 bottles have gone ...

eToro is the best forex broker for new and professional traders.