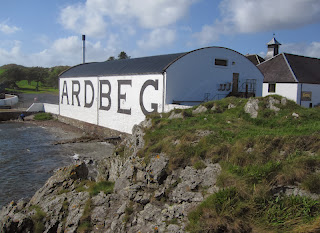 Back in September, we went on our first trip to the famous whisky producing island of Islay.  Although we were on an organised trip for journalists, we did however manage to sneak a visit to a distillery that has long been one of our favourites - Ardbeg.  Ardbeg produces some of the smokiest, peatiest single malts in the world and was one of the first of this style of whisky that we tried when we were planting our first tentative steps in to the whisky world.  We have had an affinity with it ever since because of that.

The distillery is located on the southern coast of the island and sits at the end of a road that is a real whisky lovers treat to drive along.  This narrow seashore road winds its way eastwards out of Port Ellen, the largest village on Islay, and takes you passed the iconic Laphroaig and Lagavulin distilleries before finally reaching Ardbeg. Turning off and down the drive way, the view is spectacular as the track slopes towards the sea and the white distillery buildings hug the shore.

Ardbeg was officially founded in 1815 by John MacDougall, although records show evidence of an illegal distillery operating on the site dating back to 1794.  The distillery has had a slightly chequered history as it has been closed on a number of occasions by various owners.  The most recent of these was in 1996 - this was only for one year and saw the distillery taken over and renovated by Glenmorangie plc.  They have subsequently been taken over by Louis Vuitton Moet Hennessey and they remain the owners today.

LVMH have done extensive work at the distillery and everything looks fresh and pristine.  They also made the strategic to keep all whisky produced at Ardbeg to themselves and have not sold any to independent bottlers since 1997.  A combination of this and the innovative marketing of the brand, including the award-winning interactive website, has led to Ardbeg attaining cult status with whisky drinkers across the world.


The tour was taken by Dougie and our small group started in a compact room, which was part of the main distillery building.  This was littered with various old photos of the distillery and other pieces of paraphernalia and equipment from Ardbeg's past.  Dougie gave us a brief history and introduction to the distillery before leading upstairs in to the old malt bins area.  This area (pictured, below) was used to house the malted barley as it waited to go through the production process.  The series of silos, each of which can hold 25,000 tonnes of grain, are made of wood and can no longer be used due to food hygiene regulations that have been introduced.


Our next stop was the tiny milling room, which struggled to fit Dougie and our group of eight in.  This room is home to a Robert Boby mill, which originally dates back to 1913, and was installed at Ardbeg in 1921.  It can mill up to four and a half tonnes of grain at a time and is set to produce the standard of grist required.  This is formed of three parts - husks, grits and flour - and these are milled to the proportion of 20%, 70% and 10% respectively at Ardbeg.  Ardbeg's malt is prepared at the nearby Port Ellen Maltings and has a specification of 50-55 PPM.


Next to the mill is the mashing room.  The main feature is the cast iron mash tun, which was made by New Mill Ironworks in Elgin and has been at the distillery since 1961.  The tun holds 17,500 litres of mash (this is the mix of the milled grist and hot water) and is where the soluble sugars in the grain are dissolved.  The mash is mixed using large rotating blades (see, below) which stop it sticking together and the water temperature is increased over time to extract more sugars.  The resulting sweet liquid is called wort and this is drained off.  The remaining pieces of grain and husk are collected, dried and made in to animal feed.


The next stop for us (and the wort) is the fermentation room. This room is where the yeast is added to the wort and the soluble sugars are converted to alcohol.  This process happens in huge tanks called washbacks and Ardbeg have six of them, which are made of Oregon pine.  Each washback holds 23,500 litres of wort and this undergoes fermentation for 55 hours.  The resulting liquid is called wash and has a strength of 8% ABV.  The wooden washbacks give the room a lovely feel and the view from the window at the far end is not bad either, as the room virtually backs on to the sea.  Sadly none of our photos really did this view justice, especially as it was raining and blowing a gale.


Adjacent to the fermentation room is Ardbeg's compact still house.  There are just two stills and these produce 1.3 million litres of new make spirit per year.  The larger wash still can hold 18,000 litres of wash and this is where the first distillation takes place.  The spirit still holds 16,000 litres - this is where the second distillation takes place and the spirit that will become whisky is taken from.  The spirit still has a strange looking purifier attached to its lyne arm.  The nearest thing that this apparatus looks like is the u-bend in a toilet and it promotes the reflux of spirit back into the still.  This gives Ardbeg new make an enhanced fruity character.


Our tour ended with a tasting in the back area of the still room by the spirit safe - this piece of equipment is where the final new make spirit is collected.  The dram on offer was Ardbeg Ardbog, this year's special limited edition bottling. This made us realise that we have never actually reviewed Ardbog.  (Bad us, but sadly one of the pitfalls of us all having day jobs and only writing in our spare time).  The whisky was launched in June with numerous innovative events taking place around the world, including one we attended involving inflatable flying sheep being herded over London Bridge.


So finally here is our review of Ardbog ... the release was so named to celebrate the bogs around the distillery that provide Ardbeg (and the other Islay distilleries) with the peat that gives their whiskies the distinctive smoky flavours. It was matured for 10 years in a combination of ex-bourbon casks and ex-Manzanilla sherry butts, and was bottled at the cask strength of 52.1% ABV. The recommended retail price was £79.99 on release, but as with all previous such Ardbeg releases it sold out very quickly.  A few are still floating around online, but at much increased prices. 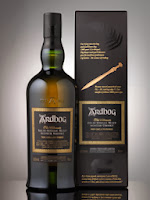 Our tasting notes
The colour is a bright golden yellow with a hint of amber and the nose is vibrant and full of freshness.  There are immediate of fudge, butterscotch and a undeniable blast of earthy peat smoke.  Underneath are further aromas of honey, vanilla, shortbread, candied lemons, damp moss and brine with hints of citrus zest, peppermint and red chilli.  The peat smoke seems to become more rubbery with time.

On the palate the chilli heat instantly hits, as does the acrid and slightly rubbery peat smoke.  These feisty notes begin to subside almost immediately allow others through.  The sugary sweet elements from the nose are again present (think of crumbly fudge and butterscotch), although the distinctive salty note that is also present combines to remind us of salted caramel.  Underneath are notes of vanilla, honey, dried green apple, oatcakes and sultanas.  With time the smoke becomes a bit more sooty and the lemony and minty notes come through again.  It is very easy to drink despite the high ABV strength.  The addition of the water knocks back the smoke and heat significantly and makes it more creamy.  The vanilla, fudge and apple notes come to the fore especially.

The finish is long and brooding with the sooty peat smoke lingering for a significant time.  The sweet and fruity notes slowly fade to leave a drying smoky saltiness in the mouth.  It is a delicious whisky that combines all the elements well and one that shows what can be achieved with careful experimentation and use of less orthodox casks for maturation.

Tours are available all year round at Ardbeg and can be booked through the award-winning visitor centre at the distillery.  There is also a superb cafe and both are housed in the old malting facility.  A basic tour starts at £5 per person, with a more in depth tour also regularly available for £12 per person.  Other specialist tours are available - for details contact the visitor centre on 01496-302244 or take a look on www.ardbeg.com/tours.