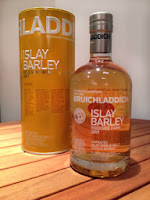 This whisky is one of a number of small batch limited editions that now intersperse the Bruichladdich core range of single malts.  The Islay Barley is made solely from barley grown on the Rockside Farm on the famous whisky isle of Islay, where the Bruichladdich distillery is located.  The whisky has then been distilled, matured and bottled on the island by Bruichladdich.  This is the third batch of Islay Barley and this version saw the grain harvested in 2006 and distilled in 2007.  It was then bottled and released to market in late 2013.

Bruichladdich (pronounced brook-laddie) is located on the western side of Islay and overlooks the shores of Loch Indaal.  The distillery was founded in 1881 by Barnett Harvey and it was one of the first buildings in the UK to be constructed using concrete.  Bruichladdich translates as 'the brae (or hillside) by the shore' from Gaelic. The current owners are Remy Cointreau, who took control in 2012 from a group of independent entrepreneurs that had renovated the distillery and rebuilt the brand since 2000. Remy's first actions were to double the production capacity, which is now £1.5 million litres per year, and prune down a massive core range.

The Islay Barley demonstrates Bruichladdich's core belief that provenance effects the quality of the final whisky.  They source barley from 10 local farms on Islay and also from others around Scotland, which are used for other releases such as the Scottish Barley.  It is bottled at 50% ABV, is non chill-filtered and of natural colour.  It has been matured in ex-bourbon American oak casks for six years.  This third batch is available now in specialist retailers and via the shop on www.bruichladdich.com.  The price should be in the £45-50 region.

Our tasting notes
The colour is pale golden yellow and the nose has a distinct malty cereal and slightly earthy/dusty aroma that kicks things off and remains prominent throughout.  There are further aromas of honey, vanilla, butterscotch and wet hay that develop and add depth.  Background aromas of green apple, lemon zest, cinnamon and ginger also feature.

On the palate this feels creamy and soft, although a distinct lemon zest note adds a pleasant tangy edge.  The softness and creaminess is driven by notes of vanilla and honey.  The vanilla note becomes more reminiscent of vanilla custard with time.  In addition, there are prominent notes of fresh green apple and earthy malty barley grains.  Further sweetness is added by elements of vanilla fudge, brown sugar and plump sultanas.  There are also late notes of cinnamon, dried pineapple and a pinch of ginger powder, and these give the palate added complexity.  A little heat is added as some of the youthful alcohol notes filter through, but it is generally well balanced.

The finish is on the short side with the sweeter notes, especially the honey, vanilla and dried fruits from the palate, fading rapidly to leave a bittersweet maltiness, drying cinnamon-like wood spice and that youthful alcoholic heat to take over.

What's the verdict?
The Islay Barley is a very interesting whisky and one with an honorable concept to promote the provenance of the distillery and the island that it is on.  However if we are honest, we like the concept more than the whisky.

The whisky is pleasant and has a decent set of distinct characteristics for something of six years of age.  We would like to see it matured for slightly longer so as to give greater depth and complexity, so will be interested to see what future batches of this release will bring.