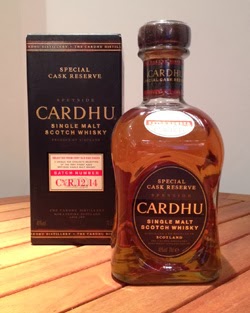 This whisky was first released to the UK market back in November and is made in small batches using hand selected 'very old rejuvenated American oak casks' from Cardhu's maturing stock. Cardhu is relatively difficult to find in the UK, despite being in the world's Top 10 for single malt sales. The majority is exported to southern Europe - Spain is the main market, along with France, Greece, Italy and Portugal. Other batches have been available in these markets for some time.

The distillery is currently owned by Diageo and it has an annual production capacity of two million litres.  Only 30% of this is released as Cardhu single malt.  There are four bottlings in the core range - this Special Cask Reserve, plus age statements of 12, 15 and 18 years. The other 70% contributes as a major ingredient for the famous Johnnie Walker range and other blended whiskies in Diageo's portfolio. Special Cask Reserve is bottled at 40% ABV and is available from specialist whisky retailers for around the £50-55 mark.

The first UK release carries the batch number CSCR.12.14.  This is the one that we are sampling.

Our tasting notes
The colour is golden amber and the nose is full of rich, sweet aromas.  The most prominent of these are toffee and caramel, and they are backed up by some warming woody spices (think of cinnamon) and malty cereal aromas.  There are also background aromas of dried fruits (imagine raisins, mango and peach especially), vanilla and a hint of white chocolate.

On the palate the whisky feels buttery and soft to begin with.  The woody spices and bittersweet cereal notes from the nose increase with time to give a slightly drier feeling.  However, the sweetness is most prominent feature in this whisky - this manifests itself as toffee, butterscotch and caramel-like notes, backed up by juicy dried fruits (think of sultanas and raisins, along with tropical mango) and some green apple.  There are also late hints of candied orange peel, ginger, cocoa powder and some further cinnamon.

The finish follows a similar path to the palate - it begins soft, sweet and a little sugary before switching to be drier and spicier as the woody and cereal notes increase.  A lovely chocolate orange is the lasting memory.

What's the verdict?
The Special Cask Reserve is a lovely whisky and definitely one to search out if you like your whiskies rich, sweet and with a bit of wood spice.  It has a nice depth and complexity, and is very pleasant to drink.  A dash of water also brings out the dried fruit and apple notes further, while knocking back the spices.  It also offers decent value for money as their is clearly some old whisky involved, although how old 'very old' is remains to be seen ...

Hi, You wrote that these casks were made from American oak.
I've searched the Internet looking for someone else besides you to confirm this but come up blank. How do you know the Special Cask Reserve was matured in American oak casks? By the way, I can find no information regarding which type casks were used for the Cardhu Gold Reserve either.

Do you think the cardhu gold reserve is a good beginner whisky?