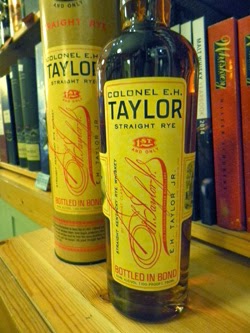 Rye can be argued to be the original American whiskey and was the most popular type of whiskey produced and drunk in the United States up to the advent of prohibition in 1920. Records show that there were various different Rye whiskies, each named after their area of production (i.e. Maryland Rye, Monongahela Rye etc) which suggests that each area produced it’s own distinctive style. Unfortunately we’ll never know if this is the case as Rye whiskies popularity declined after the end of prohibition in 1933 and many producers never resumed production.

Nowadays though, Rye whiskey is experiencing something of a renaissance with a lots of new different Rye’s now available and distillers struggling to keep up with demand. A lot of these whiskies are hard to come by in the U.K. as a lot of brands are kept for the home market but one such Rye that has made its way over here is Colonel E.H. Taylor.

Colonel E.H. Taylor, from Buffalo Trace’s stable of brands, is named after one of the chief architects of the Bottled-in-Bond act of 1897 which safeguarded the quality of bottled spirits from bogus producers by ensuring that such whiskey be aged for four years, come from one single year of production, come from one distillery and be bottled at 100 American Proof. There are also several Bourbons available in the E.H. Taylor range including Barrel Proof, Small Batch and Single Barrel editions. All quite hard to find in the U.K. Colonel E.H. Taylor Straight Rye is available for around £120 in the U.K. and around $70 in the U.S.A.

Our tasting notes
The nose is initially very juicy and fruity with notes of Orange zest, heather honey and condensed milk. Then it gets quickly spicy with lots of black pepper, liquorice and spearmint accompanied by polished oak. Not the most intense or complex nose for a Rye but very nice, definetly not lacking. Oily mouthfeel. At first it is very briefly sweet with caramel and boiled sweets and orange blossom before a big burst of spices like ginger, cloves, juniper, pepper and mint roar across the pallet all accompanied by a lovely chewy oakiness. After a brief return to the caramel and boiled sweets the finish lingers for a long while with lots of black pepper, rye and chewy oak and a slight apple, almost Calvados like sweetness. This is a very spicy Rye, although possibly coming from the oak as much as the mashbill but there’s enough sweeter, fruitier notes to offer a good counterpoint to the spices without getting in the way or dampening the intensity, making for a nicely complex whisky.

What’s the verdict?
This is an excellent Rye. Within the Buffalo Trace selection of high end Rye’s I’d place it somewhere between the refined Sazerac 18 Year old and the full-on Thomas H. Handy in terms of Ryenessness. It has to be said that although this is a very good Rye whiskey, at £120 this is quite pricey and I’d expect something pretty exceptional for that price. The price seems particularly high when compared to the prices for both the Sazerac 18 Year old and the Thomas H. Handy.
posted by Matt Tilbury at 7:47 PM