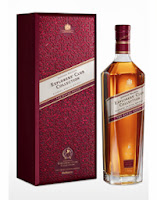 The Royal Route is the third and final release in the Johnnie Walker series called The Explorers' Club Collection.  The series is so called in reference to John Walker, the brand's founder, and his pioneering travel around the world to establish markets for his whiskies back in the 1800s. The Royal Route has been created by Diageo's Johnnie Walker blending team headed by Jim Beveridge and is made using a variety of ages of whisky, including some very old casks. It is bottled at 40% ABV and is available now for £97 ($159 US) for a one litre bottle.

Each of the whiskies is inspired by the cultural richness that can be found on three of the world's great trade routes.  The Spice Road was the first in the series and was launched in late 2012.  This was inspired the famous route which carried spices back from Asia to Europe. The Gold Route followed in mid-2013 and was inspired by the search for gold in the Americas and Caribbean.  The Royal Route honours the trail that saw riches brought back from the Far East to the Mediterranean for the ancient Kings.

The brand is named after John Walker, a man who owned a small grocery shop in the Scottish town of Kilmarnock in the 1820s. In those days most whisky sold commercially was a blend. John Walker (or Johnnie to his friends) learnt the skills required to create a commercially successful whisky and the rest is history. The success of the brand took off during Victorian times when it was heavily exported around the expanding British Empire. Johnnie Walker is now the biggest selling whisky brand in the world and its famous walking man logo are now embedded in world culture.  It is currently owned by Diageo.

Our tasting notes
The colour is golden amber and the nose is vibrant and highly aromatic.  There are immediate notes of baked apple and caramel.  Then comes more fruity aromas in the form of raisins, sultanas, dried pear and hints of orange and peach (or is it apricot?).  Underneath are more robust aromas of bittersweet cereals, cinnamon bark and a whiff of earthy smoke.

On the palate this feels rich, viscous and a little sugary.  There are initial prominent notes of crumbly brown sugar and candied orange peel, which are backed up by further sweet notes of toffee and fudge.  The vibrant fruitiness from the nose then starts to come through, although it is a little more subdued than before.  Again there are dark dried fruits (think of raisins and sultanas, plus some figs now) and crisp green apple and pear.  A superb depth and complexity is accentuated by some background wood spice (the cinnamon again, plus some drying oak) and faint, delicate earthy peat, which is most reminiscent of soft cigar smoke.

The finish is long and slightly tangy.  The sweeter notes fade quite quickly to leave the woody spices and candied orange notes to compete with each other.  The combination is lovely and lingers for a good couple of minutes.

What's the verdict?
The Royal Route is the top whisky in The Explorers' Club Collection range and they have done well with it.  The richness and complexity is very good, and makes for an enjoyable drinking experience.  In fact, they have done very well with all of three whiskies in the series.  What is refreshing is that there is a range of new whiskies, all of which are priced under £100.

However, if we had to choose one from the series it would be The Spice Road.  This may be the entry level one and the cheapest at around £30, but it is because of this that we have picked it.  The quality is excellent and it represents amazing value for money.  Next time you are traveling through an airport, be sure to check all three out ... they should be available to taste.

We're doing a bit of an 'event week' covering some of the basic Johnnie Walker expressions this week - though have not made it quite so far as the explorers club, sadly. Are these readily available outside of duty free? I often struggle to find certain releases here in Australia...
Anyway, keep on waffling,
Nick

eToro is the #1 forex broker for rookie and full-time traders.