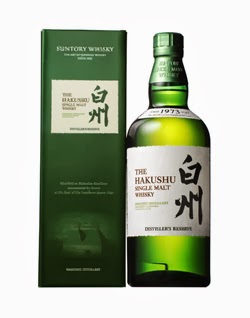 The Distiller's Reserve is a new single malt from the Japanese distillery of Hakushu.  The whisky has been constructed to showcase the qualities and characteristics of Hakushu's young lightly peated single malts.  These have been accentuated by blending with older heavily peated malt and aged (all of which are 18+ years old) American oak matured whisky.  All the casks used have been hand selected by Shinji Fukuyo, who is only the fourth Chief Blender in owner Suntory's 90 year history.

Hakushu is located on the slopes of Mount Kaikomagatake in the Yamanashi Prefecture, which lies to the northwest of Tokyo. It sits 700 metres (2,300 feet) above sea level. The location is reflected in the name, as Hakushu means 'forest distillery' in Japanese. As mentioned, it is owned and operated by Suntory and was opened in 1973, exactly 50 years after they opened their pioneering first distillery at Yamazaki.  The current production capacity is three million litres per year.  In addition, a new 'experimental' grain distillery has recently started operating on the site.

The Distiller's Reserve joins the 12 years old expression to form a core range.  They will be occasionally joined by limited editions, as has happened in the past.  Suntory recommend drinking it neat or in a highball with ice and soda water.  The Distiller's Reserve is bottled at 43% ABV and will £42 per bottle.  It will be available very shortly in specialist whisky retailers.

Our tasting notes
The colour is a pale lemon yellow and the nose is light, delicate and perfumed.  Despite this, there is plenty going on.  The initial aromas are of fresh green pears, vanilla and lemon zest.  Underneath is a lovely note of freshly mown grass and coconut along with hints icing sugar, mint, peach and a whiff of damp smoke.

On the palate, this whisky has an instant tangy and refreshing feel.  This is driven by an assertive note of lemon zest.  This note is quickly backed up by a combination of notes that work superbly together - think of vanilla, honey and something distinctly herbal (this is reminiscent of a mixture of fresh grass, mint and menthol/eucalyptus).  There are also hints of marshmallow, elderflower cordial and ginger, which adds a pleasant warmth and earthiness.  Most of these characteristics seem to come from the younger whisky, but notes from the other older whiskies add depth and complexity.  These include hints of peppery slightly acrid peat smoke, tinned tropical fruit salad and an increasing cinnamon-like wood spice.

The finish is long for such a delicate whisky.  The sweeter and fruitier elements are the first to fade, followed by the zesty lemon notes.  It is the soft peat smoke and the menthol-like grassy notes that linger and hold on to the taste buds.

What's the verdict?
The Distiller's Reserve is a lovely light and refreshing whisky.  It highlights the qualities of the younger whisky, which was the intention, but offers subtlety along with plenty of depth and complexity thanks to the skill of the Chief Blender's use of older whiskies.

It worked superbly in a highball when mixed with soda water at the launch event that we attended, but equally holds its own when sipped neat.  Each time you take a sip, you find something different and to us that is the sign of a good whisky.  It is a superb whisky and a welcome addition to the Hakushu stable.  Check it out if you can, especially as it is released at such a decent price.

Did you know?
Hakushu filter their whisky after maturation through bamboo charcoal, creating a unique character within the spirit. They are the only Japanese distillery to practice this technique.

Hakushu actually means 'white sandbar', which reflects the geological character of the site. Namely the white sand at the foot of the mountain.