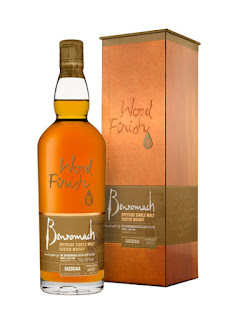 The Sassicaia Wood Finish is a new addition to the single malt range from the small Speyside distillery of Benromach.  The bottling is the latest in a limited edition series of wood finished whiskies, each with part-maturation in a different wine cask. This new expression was distilled in 2007 and has been matured predominantly in first fill ex-bourbon barrels, before being transferred to the ex-Sassicaia wine casks.  Sassicaia is red wine that is produced in the Bolgheri region of Tuscany and is made predominantly using Sangiovese and Cabernet Sauvignon grapes.  The wines are rich and spicy and are sometimes referred to as Super Tuscans.

Benromach is the smallest distillery currently in operation in the Speyside region and is located on the outskirts of the town of Forres. Only three people are employed there and the current annual production capacity is just 500,000 litres per year. It was founded in 1898 under the name of Forres Distillery and was one of the last to be designed by the renowned Victorian distillery architect Charles Doig.

The distillery became known as Benromach in 1919, taking the name from the nearby Romach Hills. The current owners are Gordon & MacPhail, the leading independent bottling company, who are based in nearby Elgin. They took control of Benromach in 1993 and fully renovated the distillery over a five year period. It had been closed for the previous 10 years and was re-opened by Prince Charles in 1998.

"Our Wood Finish expressions allow us the opportunity to provide customers with a special malt full of character, thanks to the final maturation period in casks from distinguished wine regions. The finishing period in Sassicaia wine casks allows for an exceptional flavour profile to develop."
Keith Cruikshank - Distillery Manager at Benromach.


The Benromach Sassicaia Wood Finish has been released at 45% ABV and there are just 3,500 bottles.  They will be available through selected specialist retailers worldwide with a recommended retail price of £41 a bottle.

Our tasting notes
The colour is golden amber with a distinct reddish tint and the nose has a lovely and promising mix of aromas - think of caramel, raisins, marzipan and strawberry jam initially.  Underneath are further notes of cookie dough, vanilla, butterscotch and a whiff of mellow earthy peat smoke.  With patience, hints of menthol and milk chocolate come through also.

On the palate it is the soft smokiness that comes through first and this is much more prominent than on the nose.  It has a lovely earthy quality and lingers throughout, which has the effect of accentuating the other characteristics that develop.  Next comes a defined sweetness and this takes the form of toffee and honey.  These notes are complimented by some warming wood spices (imagine cinnamon and ginger) and a hint of burnt or caramelised orange.  The interesting strawberry jam note from the nose develops late, which gives further sweetness and complexity.  Final hints of white pepper, bitter almond and dried cherries adds even more depth.

The finish is of decent length and it is the mellow peat smoke that lasts longest.  The strawberry jam, caramel and honey characteristics begin to fade and let the smoke, the warming wood spices and the bitter elements (the almond, cherry and orange) battle it out.  Returning to the empty glass about 10 minutes later reminded us of Bakewell tart.

What's the verdict?
This new Sassicaia Wood Finish is an interesting whisky that offers good sweetness and fruitiness against subtle peat smoke.  The excellent price point presents the perfect opportunity for those that may never have tried a wine cask finished whisky to do so without breaking the bank.  We are fans of Benromach and their innovative approach to casking and whisky making, and this release simply adds to their impressive portfolio of bottlings.  Long may this approach continue.