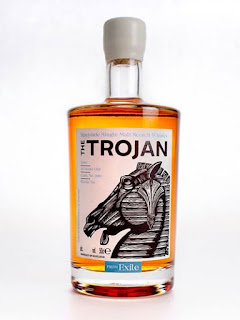 The Trojan is the fifth bottling in the A-Z series of CaskStrength Creative, AKA whisky writers Joel Harrison and Neil Ridley.  Labelled under the Exile Casks banner this bottling representing E takes the series in a different direction and highlights 'lost' casks from distilleries. This follows previous bottlings in the form of single casks from Arran and Benriach, a cask strength version of Cutty Sark and 3D (a innovative blended malt of Dailuaine, Dalwhinnie and Dufftown). The Trojan is from an un-named Speyside distillery (apparently there is a clue to the identity on the label) and is a 25 years old single cask.

So why is it called The Trojan?  Much like the famous story of the Trojan Horse, this whisky is one thing that was disguised as another.  The new make spirit from one distillery was filled in to the cask from a different company on 19 June 1990.  This cask (#3110) was earmarked for a certain project, which then fell through at some point.  The cask, a re-fill hogshead, was then not re-assigned for another use and has been left maturing ever since.  It was essentially 'lost' in the system until Neil and Joel rescued it.

"Our ethos with our A-Z bottlings has always been to release these at the best possible price points, as drinking whiskies, not collectors items. We weren’t sure where to go with E, and over the last 3 years have come across casks that, quite simply, have fallen off the manifest in warehouses across Scotland. We’ve liberated them for people to enjoy under the ‘Exiles’ banner."
Joel Harrison.


The Trojan is bottled at the natural cask strength of 57.1% ABV and costs a bargain £65 per 50cl bottle, plus postage and packing.  There are just 306 bottles and they can only be obtained via the www.exilecasks.com website - be quick as they are selling fast.

Our tasting notes
The colour is a deep golden yellow and the nose is highly aromatic and full of fruit.  The initial aromas are of a combination of stewed apple (think of apple crumble) and caramelised tropical fruits, such as pineapple and mango.  Something more bitter, possibly rhubarb, is also present.  These fruity aromas mingle with golden syrup and waxy furniture polish with hints of white chocolate, earthy ginger and a hit of candied lemons right at the end.

On the palate this whisky feels slightly oily and waxy with the golden syrup and delicious caramelised nutty notes rising first.  The high ABV also adds a pleasant peppery heat that becomes more ginger-like with time.  Then comes plenty of thick heather honey and vanilla, before the intense fruit from the nose explodes on to the palate.  This is represented by a lovely combination of dried mango, caramelised pineapple and apple, candied lemons and a hint of maraschino cherry.  Further hints of rose petal (or possibly Turkish delight?), cinnamon, star anise and menthol round things off.  A late hit of white chocolate adds even further depth.

The finish is long but seems less sweet and fruity.  Some drier and spicier characteristics come through well especially once the honey, chocolate and tropical notes all begin to fade.  This reveals an interesting bitter cherry note.  This too gives way finally to increasing oak and cinnamon-like wood spices, some earthy ginger and tangy candied lemon.

What's the verdict?
The Trojan is a complex, classy and luxurious whisky that is bursting with exotic fruit and delicious sweetness. The nose is wonderfully expressive, the palate is sublime with plenty of depth and the finish lingers for ages.  The price for a whisky of this quality is outstanding and astounding, and Neil and Joel should be applauded for that.

The excellent quality makes us wonder how many more such casks of superb whisky are sitting in warehouses somewhere in Scotland 'lost' or with no exact purpose.  It seems a shame.  Other Exile Casks are planned so it is going to be very interesting to see what other hidden gems they have unearthed.

posted by Whisky For Everyone at 7:26 PM