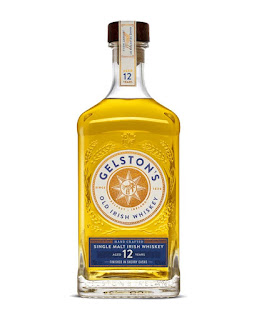 Gelston's is a triple distilled Irish single malt brand and this 12 years old has been finished in ex-sherry casks. It is one of three whiskeys in the core range at the same age, with each having been finished in a different type of cask (the other two are ex-Port and ex-rum). Other whiskeys in the Gelston's core range include the Irish Single Malt, the 5 years old and the 26 years old Very Rare Reserve. This version of the 12 years old has been matured in first-fill ex-bourbon barrels for 12 years and then finished in ex-Pedro Ximenez sherry casks. The Gelston's 12 years old Finished In Sherry Casks is bottled at 43% ABV and is available in selected markets globally. A bottle should cost around the £68 mark.

The brand was founded in 1830 by Samuel Gelston, a wine and spirits merchant based in Belfast in Northern Ireland. His Gelston's Old Irish Whiskey became very popular and upon his death the brand was sold to Harry J Neill, who expanded the business and distribution significantly.

Gelston's, like many Irish whiskey brands, then disappeared as sales slumped due to Prohibition in the USA in the 1920s but has now been revived by Johnny Neill, a fifth generation descendant of Harry J Neill. He has also created such brands as Whitley Neill and Marylebone gins, and Gelston's sits within the wider Halewood International spirits portfolio.

Our tasting notes
The colour is bright golden yellow and the nose is light, vibrant and fresh. There are initial aromas of green apple and fresh cut grass. Then comes vanilla and honey with further aromas of sultana, dried peach and milk chocolate. Complexity is added with underlying malted cereal, plus hints of candied orange and juicy apricot.

On the palate this whiskey maintains it vibrancy and freshness. Juicy fruits rise first - think of peach, apricot and green apple - and it is not long before they are joined by vanilla, runny honey and some white chocolate. Then come the dried fruit notes, although these are more pronounced than on the nose and include sultana, raisin and candied orange. Underpinning everything is an increasingly robust malty cereals characteristic. Further depth is added by notes of dark moscovado sugar and pinches of cinnamon, cocoa powder and white pepper. Background hints of mocha, fresh mint and grass clippings round things off nicely.

The finish is of decent length with the sweetness and fruitiness lasting well. It is the powdered notes such as cinnamon, cocoa and pepper that carry through and linger most, giving a pleasant and warming dryness. Delicious.

What's the verdict?
On the basis of this whiskey, it feels like Gelston's could well be one of our whisky discoveries of the year. The 12 years old Finished In Sherry Casks is packed full of sumptuous aromas and flavours and is a great example of Irish whiskey at this age. It will be interesting to try the other whiskeys in the range and see how they compare.

It is easy to see why this 12 years old expression has picked up such high accolade awards as a recent Double Gold medal at the San Francisco World Spirits Competition 2020. For those fans of Irish whiskey who are not aware of Gelston's, then you need to search this out and try it. This ex-sherry cask finish is an absolute cracker.