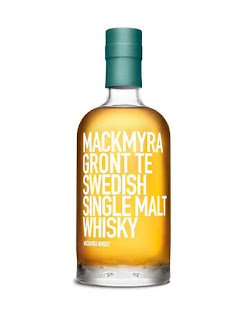 The Mackmyra Grönt Te is the Spring 2020 seasonal limited edition from the pioneering Swedish distillery. The name is Swedish for 'green tea' and refers to the fact that some of the whisky included has been matured in casks saturated with a blend of Oloroso sherry and Japanese green tea. In addition there are also whiskies matured in ex-bourbon, ex-Oloroso and ex-Swedish oak casks. It has been created by Angela D'Orazio, the Master Blender at Mackmyra, in collaboration with a Japanese tea merchant in Stockholm and is bottled at 46.1% ABV. Mackmyra Grönt Te will cost £59/ 730 SEK/ €68.

Mackmyra was founded in 1999 by a group of friends who decided to build Sweden's first single malt distillery whilst on a skiing trip. The original distillery was small and was replaced in 2012 by a new eco-friendly distillery in the town of Gävle. This state-of-the-art distillery is 37 metres high, cost an estimated £50 million to build and uses gravity during production - simplistically, malted barley is fed in the top and new make spirit comes out of the bottom. The annual production capacity is approximately 525,000 litres.

"Grönt Te is inspired by my holidays in beautiful Japan, I brought home ideas about an innovative finish and took my chance to think free from old whisky traditions. I combined one of my favourite flavours, green tea from Japan, with my great passion, whisky."
Angela D'Orazio.


Our tasting notes
The colour is bright golden yellow and the nose is full of green apple, toffee and butterscotch aromas. These are supported by further aromas of brown sugar and tinned tropical fruit, alongside something herbal (this is most reminiscent of menthol or eucalyptus) and a whiff of late oak spice - think of cinnamon and all-spice especially.

On the palate this whisky has an initial sweet feel with a hint of peppery freshness. Boiled toffee sweet characteristics mix with vanilla and a dash of golden syrup. These sit alongside notes of fruit syrup, fleshy white peaches and tinned pineapple with a hint of lychee. Then come the bitter, drying and vegetal green tea related notes - think of dried grass, eucalyptus and dried rosemary with a pinch of dried jasmine and Autumnal leaf litter. Late spice adds further depth and complexity in the form of cinnamon, mace, all-spice and a hint of gingerbread. Hints of vanilla essence and creamed coconut round things off.

The finish is of decent length and is initially sweet as on the nose and palate. Then it follows a similar track and the drier green tea and wood spice elements come in to play. The result is a deliciously mouth watering and intriguing whisky.

What's the verdict?
Mackmyra has always been experimental and innovative since it began back in 1999. The use of unorthadox casks for maturation has been at the core of this and the Grönt Te is no exception. Rather than sourcing a cask from a non-traditional origin, this whisky has seen the liquid that has seasoned the cask be enhanced by another flavour - in this case a blend of green teas.

The result is a fresh, vibrant and undoubtedly quirky whisky that will surely see other brand immitations over time. The combination of juicy fruitiness, lively sweetness and the leafy, vegetal elements makes for a very interesting whisky. There are only around 15,000 bottles available, which are at a decent price, so we advise on grabbing one while you can.