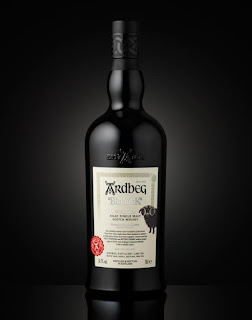 The Blaaack is the annual Ardbeg Day release from the Islay distillery of Ardbeg. The 2020 edition celebrates the 20th anniversary of the Ardbeg Committee, one of the world's first distillery clubs that boasts over 100,000 members. Ardbeg Blaaack is so named to honour the distillery's 'black sheep of the family' image amongst Islay distilleries and has been matured in ex-Pinot Noir red wine casks. These were sourced from New Zealand by Dr. Bill Lumsden, the Director of Whisky Creation at Ardbeg. This cask strength limited edition will be released at 50.7% ABV exclusively for Ardbeg Committee members. A bottle will cost £94.

Ardbeg Blaaack will also be released to a wider audience at 46% ABV on Ardbeg Day (May 30), the traditional final day of the week-long Feis Ile festival on Islay, amid celebrations both on the island and world wide. This version will be available via the distillery shop, plus Ardbeg Embassies and selected specialist whisky retailers around the globe. A bottle will also cost £94 (€115/ $125 US).

Our tasting notes
The colour is golden yellow with a distinct tint of red and amber. The nose has an interesting mix of deep peat mixing with sweet and confected aromas - think of caramel brittle, honeycomb and cherry bakewell tarts combined with damp moss, bonfire embers, old cigar boxes and dried seaweed. It feels heady, feisty but very inviting.

On the palate this whisky has an initial touch of youthfulness about it with the acrid and medicinal peat smoke leading the way. This manifests itself as damp and acidic peat, which then evolves to be more savoury and ashy with an additional seaweed-like quality. Then come much needed sweeter notes, which again have this slightly confected feel as on the nose. The caramel brittle and cherry bakewell tarts are again present and sit alongside notes of candy canes, brandy soaked raisins, golden syrup and boiled cherry sweets. Underneath are hints of cocoa powder, gingerbread, cigar wrapper leaf and black truffle - these add further depth, complexity and warmth. A final hint of white chocolate, candied lemon and clove round things off.

The finish is long and warming. The sweet and confected notes linger well, especially those of the caramel and boiled sweets, but it is the vibrant peat smoke that drags out the length. As the sweetness fades it is this that comes to the fore and makes the whisky spicy (think of warm baking spices with a pinch of white pepper and chilli), dry and mouthwatering. The acrid notes of embers/ash and seaweed accentuate this.

What's the verdict?
The Ardbeg Blaaack Committee Release is an attack on the senses. But in a good way. There is so much going on from the moment that you put your nose initially in to the glass. Big, bold and peaty aromas and flavours marry superbly with sweet, fruity and confectionary notes. The combination of highly peated spirit plus ex-red wine barrels is intense but delicious.

The result is one of Ardbeg's best limited edition releases for a number of years in our opinion. We have alway enjoyed the distillery's Ardbeg Day releases but these elements help to elevate this year's above others in recent memory. A fitting tribute to the ground-breaking Ardbeg Committee. Here's to the next 20 years ...

posted by Whisky For Everyone at 1:53 PM