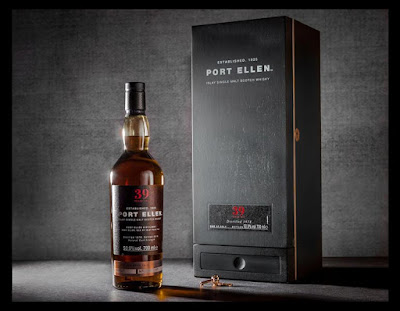 This whisky is the first release in the Untold Stories series of very rare bottlings from the closed distillery of Port Ellen. This series will feature some of the last remaining stocks that were distilled before the Islay distillery closed in the early 1980s and this first bottling is is named 'The Spirit Safe'. It was released in April 2019 to much fanfare. All the spirit involved was distilled in 1978.

Port Ellen : Untold Stories 'The Spirit Safe' has seen nearly four decades of maturation in both ex-bourbon and ex-sherry casks, and is the oldest ever release from Diageo - the brand owners. It is bottled at its natural strength of 50.9% ABV and the exact number of bottles in the release has not been revealed. The price is £4,500/ $5,935 US and is available from super premium retailers worldwide.

"Port Ellen has a uniquely powerful resonance with whisky-lovers around the world. Only a very few people will ever be able to try the original single malts as they are becoming increasingly rare, so we are thrilled to release this whisky for new generations of people to enjoy."
Dr. Nick Morgan - Diageo.


The Port Ellen distillery was founded in 1825 by Alexander Kerr Mackay and closed in 1983. However, Diageo have embarked on a project that will see a new distillery built on land close to the original site. The old distillery buildings were demolished many years ago. It will feature production facilities, along with cask filling and traditional warehousing on site, plus a visitor centre.

The aim is to replicate the methods of production as closely as possible to that of the original distillery, which was in the medium peated style. The new Port Ellen will be one of Diageo's smallest - the predicted annual production capacity will be just 800,000 litres. Most of the spirit produced will be allocated for future single malt release. It is hoped to be in production by mid-2021.

Our tasting notes
The colour is a vibrant golden yellow and the nose is vibrant and expressive. There are initial aromasof golden syrup, gingerbread, toffee and candied limes. Underneath are further aromas of ripe tropical fruits (think of pineapple, mango and maybe some lychee) and some distinct earthy and woody spices - imagine sandalwood, dry Autumn leaf litter, cigar wrapper leaf, cinnamon and clove.

On the palate this whisky is again vibrant, which is not always the case with whiskies of this advanced age. There are expressive notes of juicy and over ripe tropical fruits - think of the pineapple, mango and lychee from the nose, plus some peach and apricot - and these mingle with sweet notes of toffee, manuka honey, golden syrup and a hint of milk chocolate. Then come the savoury notes, which evolve to become more prominent than on the nose. Subtle peat and cigar smokes mix with soft baking spices (cinnamon, all-spice and clove in particular), warming gingerbread and hints of menthol, charcoal and sea salt.

The finish is long and becomes distinctly ashy and dry with time. The tropical and sweeter notes fade to leave bonfire embers, charcoal and warming spices to the fore. Underneath are more subtle late notes of cocoa powder and malted cereals.

What's the verdict?
This is a fabulous whisky. Like most that we have tried in the past, predominently those part of Diageo's Special Release programme, this Port Ellen has a subtle smokiness that is way softer than most associate with Islay. Some of that is to do with the extreme age as peatiness mellows and evolves with time. But some must be to do with the original spirit, which is why it will be interesting to see what the new version of the distillery produces.

This 39 years old drinks incredibly easily at 50.9% ABV and is of course expensive - you are paying for an old whisky from a closed distillery (and an iconic and famed one at that). Not exactly a 'whisky for everyone' as some will point out, but it is a whisky for someone. Good luck to them and we hope they enjoy it as much as we did.