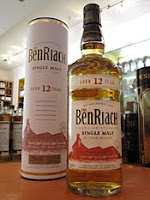 Benriach distillery is located approximately 3 miles to the south of the city of Elgin in the Speyside whisky region. The distillery was founded in 1897 by John Duff & Co, who had already built the Longmorn distillery on a neighbouring plot of land in 1894. The original name was the slightly unimaginative Longmorn 2, before this was changed to Benriach in 1899. The distillery currently has a production capacity of 2.8 million litres per year, with most being released as single malts.

Benriach had a very short early history – it was closed and mothballed in 1903 and not reopened until 1965, when it was bought and restarted by the Glenlivet Distillers Ltd. It was closed and mothballed again in 2002 by the owners at the time, Pernod Ricard. In 2004, an independent group named the Benriach Distillery Company took over the distillery and all of its maturing stock. This group was headed by Billy Walker, a former director of Burn Stewart Distillers, and this makes Benriach one of the few remaining distilleries in Scotland that are independently owned.

The Benriach single malt core range is extensive. The regular range is matured in ex-bourbon casks and consists of this 12 years old, then a 16, 20, 25 and 30 years old. There is also the 'Heart of Speyside', which is a younger whisky with no age stated. Benriach is an innovative distillery and a number of their single malts are part-matured (or 'finished') in other types of casks. This range includes whiskies 'finished' in Port, rum, Madeira, Sauternes and sherry casks. They also produce a smoky, peaty whisky, which is an unusual practice for a Speyside distillery. Smoky whiskies are more commonly produced on the islands around Scotland, especially the western isle of Islay. This range has a 10 and a 21 years old.

This 12 years old is golden yellow in colour and the nose is clean, fragrant and tempting. It feels fresh with four main elements coming through - vanilla, sweet honey, oak and malted barley. On the palate, this Benriach has a light to medium body that freshens up your mouth. The sweet malty cereal grains and a distinct nuttiness (think of almonds) start things off and are quickly joined by some creamy vanilla, oak, coconut and honey notes. A lovely mild warm spiciness comes through (imagine nutmeg and ginger) and this compliments the other elements present. The finish is mouth watering and a little zingy with a good combination of the vanilla, honey and spices. This Benriach 12 years old is a very enjoyable whisky and while not being the most complex, it is a cracker for the price (£25-30 a bottle). It would be ideal to introduce a beginner to the world of single malts and is a good example of a bourbon cask matured whisky, demonstrating all the classical characteristics. A classic and under rated Speyside whisky.
posted by Matt C at 2:52 PM