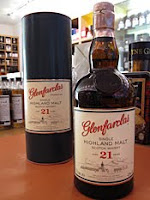 Glenfarclas is a distillery located in the Speyside region, close to the small town of Ballindalloch. It is owned by J&G Grant and is the second oldest family owned distillery in Scotland - the Grant’s have owned it since 1865. Only the Springbank distillery in Campbeltown has been owned by the same family line (the Mitchell family) for longer. Glenfarclas translates as ‘the valley of green grass’ from Gaelic. The distillery has an annual production capacity of three million litres and boasts the largest stills in Speyside. They are reknowned for their use of quality European sherry oak casks for maturation and release a comprehensive core range of single malt whisky. Glenfarclas was voted ‘Distillery of the Year’ in 2006.

George Hay founded a distillery on the current Glenfarclas site in 1836, although records show that an illegal farm distillery had been operating there since 1797. He named the distillery Rechlerich. In 1865, it was sold to neighbour John Grant and here started the second longest continuous line of family ownership in Scottish whisky history. In 1896, the distillery was completely rebuilt by John’s son, George, and with that came increased production and success and the change of name to Glenfarclas. The distillery continues to be owned by the Grant family to this day and the core range includes a 10, 15, 21, 25 and 30 years old plus other limited single cask releases.

The colour of this Glenfarclas 21 years old is golden amber and the nose is full of Glenfarclas' reknowned sherry cask influence (think of caramel, dried fruits - sultanas, candied orange peel/zest and woody spices such as cinnamon and nutmeg). In fact, initially it could almost pass for a full bodied sherry but other richer elements start to come through, especially a distinct cereal graininess and nuttiness (think of hazelnuts and walnuts) that identify this as a whisky. On the palate, this is warming, creamy and velvety. It feels thick and coats your mouth with classic sherry cask flavours - dried fruits (think of a combination of sultanas, candied orange peel and apple), nuts (those hazelnuts and walnuts again), caramel and spices (imagine ginger, cinnamon and nutmeg). There is also a lovely malted barley note, some vanilla and a further sweet element that is reminiscent of honey. The finish is long, sweet and fruity with those spices coming through well at the end.

This Glenfarclas 21 years old is a classic Speyside whisky. It is rich, easy drinking and complex and if you love sherry cask matured whiskies, then this is one that you simply have to try. Having said that, it will also appeal to beginners and drinkers who like other styles of whisky, as it is so soft and silky and exhibits so many interesting characteristics. This whisky also offers great value for money (as does the rest of the Glenfarclas range), considering its age and the price of similarly aged competitors. A bottle should cost around £50-55. A cracking dram.
posted by Matt C at 4:29 PM