The Christmas festive period is a time when the sales of whisky liqueurs goes through the roof, so we have decided to review a few of them in the lead up to the Big Day. In this second part of our review, we are concentrating on the cream based whisky liqueurs. The first post - Have just tried ... Whisky liqueurs (Part 1) - has proved very popular and featured some of the non creamy whisky liqueurs available in the UK market. It also contains further general information and facts about whisky liqueurs, so please click on the link above to read it.

Cream based whisky liqueurs contain two obvious ingredients - whisky and cream! Other than this they can be sweetened with sugar or syrup and flavoured with almost anything, with the most common things being fruit, nuts, honey, spices and herbs. They generally have a lower alcoholic strength (this is called the ABV - alcohol by volume) than the non cream liqueurs and are usually have a strength of 15-20% ABV. Most are recommended to be served chilled or with ice, although they can also be used in desserts and other sweet recipes. We are trying all of these samples chilled from the fridge.

NEW - Bailey's Coffee
This product has just been launched for Christmas 2009 and we have just received our sample from Diageo, who currently own and market the brand. Bailey's is the most well known cream based whisky liqueur and is made with Irish whisky, caramel and cream. The regular Bailey's is the biggest selling liqueur of either type in the world and they also release other bottlings in the range that are flavoured with mint, chocolate and orange. All are bottled at 17% ABV. The Original was released in 1974 and was the first whisky liqueur to be made with cream.

The colour of this new Bailey's Coffee is like that of a milky coffee/hot chocolate and the nose is reminiscent of instant coffee and hard boiled coffee caramel sweets. On the palate, this is very viscous and has the feeling of condensed milk. It has butter, toffee, coffee (instant coffee again) notes and a touch of alcohol burn in the background. The finish is short and sweet but leaves your mouth covered in thick buttery liquid. Ice would definitely help to stop this being so cloying but the flavours are pleasant and enjoyable. A 70cl bottle should cost £10-12.

Columba Cream
This liqueur is a mixture of single malt whisky, honey and cream. It is named after St. Columba who arrived on the western Scottish isle of Iona in 563 AD. The link is that the single malt included is made at Tobermory, a distillery on the neighbouring island of Mull. It is bottled at 17% ABV and is available in 70cl, 35cl and 5cl bottles (a 70cl bottle should cost £15-18). The colour of Columba is reminiscent of latte coffee and the nose smells incredibly sweet with lots of sugary honey coming through. On the palate, this is rich, creamy and extremely sweet - there is a lot of caramel, honey and toffee-like notes present and it sticks to your mouth and it is hard to shift! No whisky is detectable. The finish is short, very sweet and cloying. Keep a glass of water handy, your palate may need it!

Drumgray
Or to give it its full name Mrs. Walker's Drumgray Highland Cream. This liqueur follows an original recipe that a Mrs. Walker used to follow on her central Highland farm. It is made using single malt whisky from the Deanston distillery and cream. Drumgray is sold in 70cl, 35cl and 5cl bottles (a 70cl bottle should cost £10-12) and has an alcoholic strength of 17% ABV. The liqueur has the colour of a Cappuccino coffee and the nose has some malted barley, toffee and caramel notes. It gives the impression of being rich and sweet. This is backed up on the palate - it is rich, almost sticky and coats the inside of your mouth. There is again toffee, caramel and cereals but the silky, velvety nature is tainted by some harsh alcoholic burn. The finish is long and sweet with the alcohol burn particularly prominent. Heather Cream
This liqueur was first produced in 1980 and is a marriage of Balblair single malt whisky and fresh cream (it is one of the few to be made with fresh cream). It is marketed as the 'Cream of Scotland' and is released in 70cl, 35cl and 5cl bottles at 17% ABV (a 70cl bottle should cost £12-15). Heather Cream has a very pale colour (think of very milky tea) and the nose is subtle and delicate. There is some sweetness (imagine toffee) and cream with some maltiness from the whisky coming through. On the palate, this is fresh, clean and not as cloying as some of its competitors. It feels silky and light with some lovely caramel, toffee, cereal and vanilla notes present. The finish is pleasantly long with the caramel note coming through well. 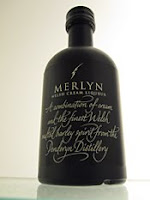 Merlyn
This is a cream based whisky liqueur made by Penderyn, the only Welsh single malt whisky distillery. It is named after the famous Welsh wizard who features in the Legend of King Arthur tales. The liqueur is only made in small batches and is only sold in 70cl and 5cl bottles (a 70cl bottle should cost around £15-18). The colour is very light and milky and the nose is light and subtle but with some interesting elements - caramel, honey, malty cereal grains and a touch of grassiness (imagine dried grass). This is delicate on the palate with the fresh cream, honey and whisky combining well. The finish is short and refreshing - the honey is predominant but the cereals and grassiness of Penderyn's whisky comes through. Definitely our favourite!
posted by Matt C at 6:52 PM

Gosh! Can't believe you tried so many whisky liqueurs...whisky is better,eh?!

Must have been a tough job...