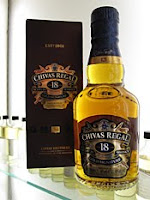 Chivas Regal is one of the most famous and best selling whisky brands in the world. The whiskies that appear under the Chivas Regal name are blends and the core range consists of a 12, 18 and 25 years old. The age statement refers to the age of the youngest whisky that is included in the blend. This is true of any blended whisky that carries an age statement. This Chivas Regal 18 years old contains a complex mix of over 20 single malt and grain whiskies, the youngest of which is 18 years of age. The Chivas Regal range is the second biggest selling range of blended whisky in the world, behind only the famous Johnnie Walker range.

The Chivas Brothers company was originally set up in the early 1800s by James and John Chivas. They owned a luxury grocery store in Aberdeen that imported highly desirable products such as brandy, rum, port, spices, tea and coffee, which they sold to their wealthy customers. They began blending their own whiskies, as was the trend at the time. Chivas Brothers' whiskies became so popular in late Victorian times that Queen Victoria issued them with a Royal Warrant and they supplied the royal household for a period of time. From this act, the name of Chivas Regal was born. Chivas Brothers and the Chivas Regal brand is currently owned by drinks company Pernod Ricard, who purchased it in 2001, and they have helped to grow the stature and sales of the whisky around the world.

This 18 years old is bottled at 40% ABV and offers good value for a premium blended whisky at £40-45 a bottle. It is widely available in supermarkets, liquor stores and Duty Free retailers around the world, although its main markets are the USA, southern Europe, Japan and south east Asia. The colour is golden and the nose is fragrant and welcoming. First comes some vanilla and cereal grains (think of oat cakes or porridge oats) and these are joined by plenty of dried fruit notes (imagine a combination of sultanas, apricots, prunes and candied orange peel) and some woody spices (think of cinnamon and nutmeg). On the palate, this is soft, velvety and very smooth. The vanilla and grain notes are present from the nose, as are the sultanas and candied orange. However, the fruitiness is now more reminiscent of stewed/cooked fruits (especially pears and apples) and this combines well with the woody spicy notes from the nose (cinnamon and nutmeg). There is also an element of toffee adding to the richness. The finish is long, warming and rich with the stewed fruitiness and woody oaky vanilla particularly prominent.

Chivas Regal 18 years old is one of the nicest blended whiskies that we have sampled to date. It is well balanced, complex and delightfully easy to drink, making it perfect for the whisky beginner and connoisseur alike. We believe that it would be a great after dinner dram and plan to have it with our dessert and cheese platter on Christmas day - the rich fruitiness and level of sweetness should make it a great match for this. Chivas Regal 18 years old offers an excellent value for money alternative to its costlier premium blended whisky competitors such as Johnnie Walker Blue Label (which should cost £150-170 a bottle). Our thanks go to Sam Harrigan and Pernod Ricard USA for supplying us with this sample.
posted by Matt C at 3:47 PM