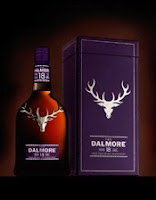 This Dalmore 18 years old has been recently released in Autumn 2009 and is a limited edition bottling. Only 3000 bottles are to be sold worldwide and there has been much expectation as it is the first time that Dalmore have ever released an 18 years old whisky. It joins the 12 and 15 year olds, as well as the rarer Gran Reserva and King Alexander III bottlings that form Dalmore's core range. The whisky has been matured firstly in American oak ex-bourbon casks before transferring to sherry casks. It is bottled at an alcoholic strength of 43% ABV and can be purchased in specialist whisky and alcohol stores, costing approximately £85 a bottle.

The Dalmore distillery is located in the northern Highland town of Alness. It was founded in 1839 by Alexander Matheson and has been owned by the current owners, Whyte & Mackay, since the 1960s. Whyte & Mackay are now part of a larger Indian owned company called United Spirits, who also own the Jura, Fettercairn and Tamnavulin distilleries in Scotland. The capacity of Dalmore in 4.2 million litres per year, although recently the average has been approximately three million per year as they consistently have water shortage problems during the warmer summer months. The whisky produced there is shared between being released as single malts and contributing to the popular Whyte & Mackay blended range. Dalmore single malt sales have increased rapidly in the last five years as they have re-branded and expanded their range.

The colour of this new 18 years old is dark golden amber and the nose is very pleasant, sweet and rich. There is plenty of malted barley that is quickly joined by the classic sherry cask characteristics - dried fruits (think of raisins and sultanas), candied peel (especially oranges), nuts (imagine walnuts and almonds) and caramel. On the palate, this feels full bodied and silky with the sherry cask notes from the nose prominent. There is plenty of dried fruit, especially raisins, and this is complimented by a lovely woody and nutty spiciness (think of a combination of cinnamon, nutmeg and walnuts). In addition, there are other elements - the slightly bitter candied orange peel, caramel, vanilla and a hint of something darker that is reminiscent of dark plain chocolate/cocoa powder and roasted coffee. The finish is rich, fruity (the dried fruit and candied peel again) with a warm spiciness (imagine cinnamon with some cloves?).

This new Dalmore 18 years old is a lovely, rich and smooth whisky. It is well worth a try, especially if you like your fruity sherry cask matured whiskies or if you drink other richer spirits such as dark rum, Cognac or Armagnac. We thank Richard Lewis of Whyte & Mackay for the opportunity to sample this dram. For further information on Whyte & Mackay then go to www.whyteandmackay.co.uk or follow their Master Blender, Richard Paterson on his Master Blender blog or on Twitter as @the_nose.
posted by Matt C at 2:40 PM