Christmas is here and it is the time of the year when whisky sales go through the roof. Another area of the market that is extremely popular and records high sales during the festive period is that of whisky liqueurs. These liqueurs attract a new and different set of drinkers to the world of whisky and are consumed in a different way to single malt or blended whiskies. They are commonly sweet and can be served as a dessert (on their own or incorporated with something else), with coffee or cream, in a cocktail or over ice.

The origin of the word liqueur is allegedly derived from the Latin word liquifacere, which is a verb and translates as ‘to become liquid’. Others say that it is derived from the French word liquor. The term ‘liqueur’ relates to an alcoholic drink that has been sweetened with sugar and then flavoured with something. This flavouring can be almost anything and the most common are fruit, nuts, honey, spices, herbs or cream. In the case of whisky liqueurs, whisky is the main ingredient that has then had sugar and other ingredients added. The ingredients are usually infused or macerated together and left for a short period in order for the flavours to marry together. Most whisky liqueurs have an alcoholic strength (called the ABV) of between 15-35%. 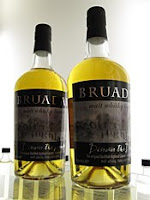 Bruadar
Bruadar is a whisky liqueur that is made from single malt whisky, honey and sloe berries. Bruadar means 'dream' in Gaelic. This liqueur is sold in 70cl, 35cl and 5cl bottles with a 70cl bottle costing £15-20. It has an alcoholic strength of 22% ABV and was formerly known as Scottish Highland liqueur. The colour of Bruadar is light and straw-like with a fresh nose that contains obvious honey and the fruity, bittersweet sloe berries (if you have ever tried sloe gin, then it has the same dark fruity aroma). On the palate, this is again light, sweet and fruity (the sloe berries again) and some malty cereal notes and vanilla come through. The finish is short and sweet although the sloes and the whisky give an interesting bitter note right at the end. 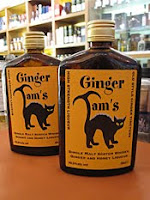 Ginger Tam's
This Ginger Tam's is a whisky liqueur with a kick! It is made from whisky, honey and ginger and is bottled at the high alcoholic strength of 48% ABV. This makes it much stronger than most other liqueurs and as a result is only sold in 35cl and 5cl bottles. The liqueur is a golden orange in colour and the nose is packed with prickly, fiery fresh ginger and sweet floral honey (think of heather honey). On the palate, this is powerful! The ginger is more like crystalised ginger now and there the associated lovely root-like earthiness. There is plenty of thick honey and vanilla, but not much whisky is detectable. The finish is fiery and the earthy ginger burns away for ages. This would make a great 'hot toddy' and would sort out a sore throat! It is powerful, cloying and sticks to the inside of your mouth. Not for the faint hearted. 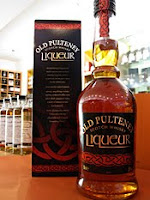 Old Pulteney Liqueur
This liqueur is made with Old Pulteney single malt whisky, honey, spices and a combination of natural herbs. Old Pulteney is a distillery that is located in the north Highland town of Wick. It is the most northerly distillery on mainland Scotland. The liqueur is bottled at 28% ABV and is available in 70cl and 5cl bottles, with a 70cl bottle costing £15-20. The colour is dark golden orange and the nose has honey and a malty cereal note to it. There is also a touch of herbal grassiness (think of dried grasses or hay) and a strange aroma that reminded us of washing up liquid. On the palate, this liqueur is thin and slightly prickly. There is some lovely sweet honey, dried fruits (imagine sultanas), vanilla, and candied orange peel that combine well with the more bitter grassy element. The shortish finish is sweet, syrupy and full of honey. 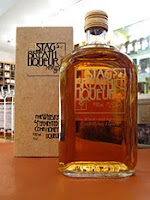 Stag's Breath
This liqueur is made from single malt Highland whisky and fermented honeycomb. It has been produced by Miekle's of Scotland since 1989 and is one of the most popular whisky liqueurs in the UK. The liqueur is bottled at 19.8% ABV and is sold in 70cl, 35cl, 10cl and 5cl bottles. A 70cl bottle should cost £15-20, depending on where you find it. The colour is golden and the nose is sweet and honeyed - you can detect the waxiness of the honeycomb. On the palate, this is surprisingly light and refreshing. It is sweet and fresh with lots of soft honey. Nothing else is detectable (including any whisky) and it feels like a liquified cold and flu lozenge. The finish is short, refreshing and quite sharp with the influence of the whisky being minimal. Basically, this is good but tastes like alcoholic honey!

The Drambuie image at the beginning of this post is taken from The Great Spirits Baking Company, whose website we have recently discovered and contains many products and ideas for recipes that use liqueurs and other spirits.
posted by Matt C at 8:37 PM

cold and flu lozenge! I want to try!!

there are other whisky liqueurs available, I have tried most, some of the best I have found are on the following website. www.theoakstrading.co.uk