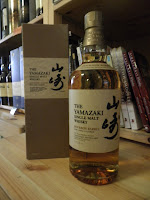 Using the government’s alcohol duty rise as a pathetic excuse to buy some more whisky (I persuaded myself I’d be saving money in the long run if I bought a few bottles before the rise!) I decided to purchase a whisky I’d had my eye on for a while. The Yamazaki Bourbon Barrel represents the latest in a number of limited whiskies Suntory release every now and then that, to date, have included heavily peated and sherry puncheon matured expressions.

Located at the foot of a mountain in a bamboo forest just outside Japan’s ancient capital Kyoto, Yamazaki distillery was founded by Shinjiro Torii in 1923. It was his ambition to make a Japanese whisky along the same lines as the Scottish whiskies that were very popular at the time. To this end he despatched his able assistant Masataka Taketsuru to Scotland to learn everything there is to know about making Scotch whisky.

Taketsuru’s time in Scotland makes for an amazing story. In 1918 he turned up alone in Scotland, determined to learn the art of brewing and distilling. A very brave thing to do at a time when people travelled such shorter distances than they do now. Britain must have seemed like a completely different world to him. He enrolled at Glasgow University and at one point travelled up to Elgin in the hope for learning first hand the skills needed for Suntory to start distilling whisky. It was at Longmorn distillery that he found someone willing to take him on and show him the ropes. His course at Glasgow also enabled him to work at Hazelburn distillery in Campbeltown. During all this he also found time to fall in love and get hitched to his landlady's daughter.

This Yamazaki was released in 2011 along side a Bourbon Barrel matured expression from its sister distillery Hakushu and is bottled at a generous 48.5% from first fill bourbon barrels.

Our tasting notes
On first nosing there are lots of cereal notes - shredded wheat, malting floors, Japanese tea, mashed potatoes, Rusks. Along side all this there’s also a nice sweet citrus fruit aroma lending a nice balance, a bit like lime cordial and chocolate limes. After a while it gets fruitier and sweeter with a little breathing with aromas of apples, pears, bananas, cherries, refresher sweets, custard powder and milk chocolate.

On the palate, there’s some lovely big first fill bourbon barrel flavours. Starting with some sweet and fruity flavours - Banoffee pie, white chocolate, bubblegum, Belgian tripel beer. The palate gradually gets a little more bitter, oaky and hot with pepper and cloves. The finish is long and tannic with a nice bittersweet blackberry note. Excellently balanced. Lots of estery flavours of fruits and sweet things balanced by an equally large dollop of drying austerity from the oak.

What’s the verdict?
Well, I wasn’t disappointed with my purchase. It’s nearest to the 12-Year-old expression out of the three standard releases but much more complex and intense. An excellently balanced whisky full of character and flavour. As far as I know it is just available in Europe and Japan. It is limited to just 3000 bottles throughout Europe, 1000 of which are for the U.K. You can get if for around £65.
posted by Matt Tilbury at 8:21 PM