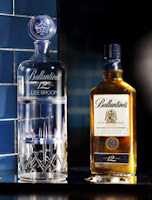 Ballantine's - Finds a new Ritual
The Ballantine’s 12 year old blended whisky has announced a partnership with critically acclaimed British product and interior designer, Lee Broom. The Ballantine’s 12 Year Old Ritual by Lee Broom was revealed at the designer’s recent show in Milan. At the event, Ballantine’s and Broom showcased the limited edition serving ritual, which has been influenced by vintage crystal whisky decanters with a contemporary twist.

The Ritual looks like a decanter but on closer inspection, breaks into three individual sections for single or shared occasions - the base acts as the whisky glass, the middle section is for ice cubes or can be used as a second whisky glass and the top is to hold water or other ingredients. There is a limited edition run of just 200 serving rituals going to markets including France, Mexico and Brazil.

Bushmills - Superstar DJs, here we go!
The famous Irish whiskey brand has announced that actor Elijah Wood will perform a DJ set at its ‘Bushmills Live’ - the festival of handcrafted whiskey and music taking place at the Old Bushmills Distillery on the 20th and 21st June. The actor, most famously known for his role of Frodo Baggins in The Lord of the Rings trilogy, will take to the decks with friend Zach Cowie.

He joins a bill that already features band Snow Patrol and award winning artists Iain Archer and Foy Vance. Fans of Bushmills Irish Whiskey can win the chance to attend the festival by entering the competition on the Bushmills Facebook page – hurry up though, the closing date is today!

Glengoyne - Auld Enemy returns
The Highland distillery of Glengoyne have launched a special limited Edition ‘Auld Enemy Dram’ in time for this year's Father’s Day on 17th June. The Auld Enemy Dram series recognises and celebrates the great sporting rivalry that exists between the two great nations of Scotland and England in the sport of rugby. This version is a Glengoyne 1990 single cask and is retailing at just £175 per bottle. It is now available to buy online at www.glengoyne.com.
posted by Whisky For Everyone at 7:18 PM