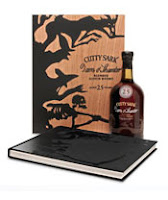 The famous whisky brand of Cutty Sark has released a new limited edition version of its blended whisky  The Tam o' Shanter was released to coincide with this year's Burns Night celebrations at the end of January. The liquid is an enhanced and rare version of their current 25 years old and is the first creation of Cutty Sark's new Master Blender Kirsteen Campbell. The new expression is named Tam o' Shanter after Robert Burns' famous poem of the same name.

The link between the brand and Burns is interesting - the famous ship was named after the scanty clothing of the sexy witch in his Tam o' Shanter poem. A newly designed bottle, based on an antique version of the Cutty Sark bottle, is packaged in a wooden box and a book illustrated by figurative artist Alexander Goudie. All show scenes from the famous poem. The Cutty Sark Tam o' Shanter is limited to just 5,000 bottles and is available from specialist whisky retailers for a recommended price of £199.

The Cutty Sark brand was born in March 1923 following a lunch between the owners of the famous London wine and spirits merchants Berry Brothers & Rudd (Francis Berry and Hugh Rudd), and Scottish artist James McBey.  They conceived the idea of producing a blending whisky with a light, refreshing style - this may not sound revolutionary now, but historically to that point most blends were rich, sweet and/or smoky.  It is named after the boat Cutty Sark, the famous tea clipper and legend has it that McBey (who was a keen sailor) started drawing the logo of the boat on a napkin.

The brand was aimed at the export market, especially those with warmer climates where its light nature would be most palatable, and soon took the world by storm.  In the post-Prohibition era in the USA, it rapidly grew to become the best selling Scotch whisky there and it remains one of the biggest selling whiskies around the globe today.  The current Cutty Sark range has expanded to include classic expression, plus age statements of 12, 15, 18 and 25 years of age.

Our tasting notes
The colour is a dark golden amber and the nose is rich and sweet with plenty going on.  There is an interesting mix of soft, sweet aromas and tangy, spicy notes.  The sweet aromas includes dark dried fruits (think of sultanas, raisins, prunes and figs), crumbly brown sugar, honey and caramel.  The tangy aromas include some prominent bitter orange, which is almost marmalade-like, and pronounced oak spices, especially reminiscent of nutmeg and sandalwood.  In the background are further aromas of milk chocolate and espresso coffee.

On the palate, this is rich, deep and sumptuous.  It again mixes the sweet and tangy characteristics together very well.  The tangy orange note is prominent and again has a marmalade or spiced/cloved orange edge to it.  This delicious note combines with the sweetness, which is driven by distinct notes of honey and caramel.  Some fruitiness then begins to appear, which manifests itself as a combination of the dark dried fruits from the nose (especially the raisins and figs) and some fresher, greener pear and apple.  Further depth and complexity is added to by some delightful wood spices, which add a lovely dryness as you swallow the whisky and progress towards the finish.

The finish again has a large amount of spiced orange to begin with and these are joined by the wood spices (especially some nutmeg) and some much needed brown sugar-like sweetness.  The lasting impression is of strong espresso coffee with a hint of chocolate with a high cocoa percentage.  Unusual but very good.

What's the verdict?
The Tam o' Shanter is a very classy whisky and one feels like a true treat to sample.  Its rich, luxurious nature has plenty of depth and complexity on the nose, palate and finish.  It also has a relatively high alcohol strength for a blended whisky (46.5% ABV) and this gives it a grip and extra intensity on the senses.

This is superb stuff and a great first whisky by the new Master Blender of Cutty Sark.  Anyone who thinks that blended whiskies are an inferior product to single malts should taste this and then try to maintain their argument while keeping their credibility intact.
posted by Matt C at 7:12 AM