Back in February, the iconic Islay distillery of Bowmore announced the release of three new whiskies exclusive to the travel retail/Duty Free sector. The first is 100 Degrees Proof which is cask strength and will retail at £50. The second is SpringTide which has been predominantly matured in ex-Oloroso sherry casks and will retail for £120. The final release is a 1983 Vintage - the first of a series of Bowmore single casks from the 1980s which are to be released to the travel retail market - which will retail for £500. All three were released in March around the world and we were delighted to receive samples of two of them, which we have reviewed below.

The Bowmore distillery is located on the famous whisky island of Islay, which lies off the west coast of Scotland. Bowmore was founded in 1779 by John Simpson, making it the oldest of the eight distilleries currently operating on Islay and one of the oldest of all in Scotland. The distillery is located on the shores of Loch Indaal and Bowmore translates as 'sea rock' from Gaelic. It is currently owned by Morrison Bowmore, a subsidiary of the Japanese company Suntory, and has an annual production capacity of two million litres. Bowmore is one of the world's biggest selling single malt whisky brands in the smoky, peaty category.

Our tasting notes - 100 Degrees Proof
The colour is golden yellow and the nose has a distinct grainy aroma, which mingles well with toffee and savoury peat smoke.  These initial aromas are joined by others to create something interesting and tempting.  Think of vanilla, honey, golden syrup and a hint of citrus zest especially, as the malty barley note seems to increase.  It seems surprisingly soft for a cask strength whisky.

On the palate, the savoury and slightly ashy smokiness is much more prominent and is the defining characteristic of the whisky.  It lingers and lingers, allowing numerous other notes to appear and disappear, before carrying you through to the dry and slightly salty finish.  Other notes that contribute to the palate include some lovely sweet vanilla and honey, malty cereals, some baking spices (think of cinnamon and nutmeg), plus hints of crumbly brown sugar, salty brine and something vegetal, possibly dried grasses but a little difficult to define.  The combination is delicious and seems to have depth, complexity and good balance. 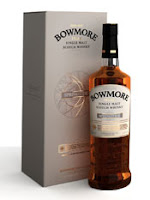 Our tasting notes - SpringTide
The colour is a coppery amber and the nose has plenty of richness on offer immediately.  A combination of aromas combine to give a promising start - there is prominent toffee and fudge along with some toasted almond, milk chocolate and a hint of spiced orange.  These aromas are complimented by some feisty, spicy and slightly savoury peat smoke.

On the palate, the savoury peat smoke hits first and as this fades, other elements mingle, compliment and begin to take over.  Again, there are plenty of toffee, fudge and caramel-like notes, along with the chocolate and toasted almonds from before.  These are joined by a hint of ground coffee and a top note of palma violet sweets (a classic indicator of older Bowmores).  The finish begins with the sweeter notes but quickly becomes bittersweet, savoury and a little dry.  The peat smoke is never far away and takes an age to fade.

What's the verdict?
Suntory are clearly 'upping their game' when it comes to their travel retail releases.  These two Bowmores, plus the recent additions from Auchentoshan that we recently reviewed, confirm this. It is not to say that previous releases were poor ... quite the contrary - it is just that these recent new releases seem superior and have raised the bar.

Both of these whiskies are very good, but in different ways.  The 100 Degrees Proof somehow mixes the high ABV strength and strong characteristics, with a surprising set of subtler notes.  The SpringTide is richer and heavier with more obvious sweetness and ex-sherry cask influence.  Again this balances well.  The price of the 100 Degrees Proof seems particularly competitive for the whisky that is on offer and gives us something else to save up for on our next holiday ...
posted by Matt C at 7:29 PM