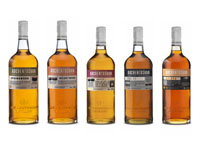 Auchentoshan have recently announced the release of a new travel retail range available only international airports and border shops. The range consists of four core expressions with two limited edition releases coming out each year. The whole range is paying tribute to the wood, which plays such a vital part in the whisky’s maturation. Each whisky included in the range is inspired by the phase of a tree’s life cycle and is named to reflect the whisky’s flavour as if it were part of the tree’s life.

The five whiskies that are being released at the beginning are Springwood (the youthful time of growth for the tree), Heartwood (the core of the tree and the older sibling to Springwood), Silveroak (named after the silver rings that appear on the inside of an older tree to describe a whisky with maturity and complexity and higher ABV of 51.5%), Solera (named after the aging system used to make Pedro Ximénez sherry whose casks are used to age this whisky) and the 14 years old Cooper’s Reserve (the wood and the whisky are mature and rounded). We were lucky enough to receive samples to review of two whiskies that are part of the core range – Springwood and Heartwood.

Auchentoshan (which is pronounced ock-en-tosh-an) is the nearest distillery to Glasgow. It sits to the north west of the city near Clydebank and was officially founded in 1823. Auchentoshan translates as ‘corner of the field’ from the local form of Gaelic. Auchentoshan is unique amongst Scottish whisky distilleries as they triple distil every drop of their spirit using three stills. Elsewhere in Scotland the common practice is to distil twice, whereas triple distillation is more commonly associated with Irish whiskies. Triple distillation produces a new make spirit that is lighter and more delicate in flavour and higher in alcohol - 81.5% ABV which is the highest in Scotland. 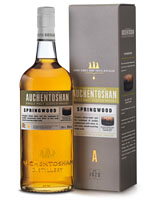 Our tasting notes – Springwood
This pale golden straw coloured whisky is matured solely in American Oak bourbon casks and bottled at 40% ABV. On the nose this whisky has notes of white chocolate, vanilla sugar, honey, lemonade, and some grassiness which is fresh vibrant and zesty. It reminded us of homemade lemonade with chocolate chip cookies on the side. To taste this whisky offers lots of vanilla initially plus lots of zesty lemon which then opens up into cereal grains, dried grass and green apples plus some of the honey. The finish is not overly long but continues with the fresh and zesty feel. 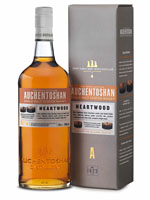 Our tasting notes – Heartwood
This whisky is matured in deeply charred American Oak bourbon casks and Spanish Oloroso sherry casks giving it a rich amber colour. At 43% ABV this is slightly higher in alcohol but remains very approachable and fresh.

Proving that it is the Springwood's sibling, on the nose there are citrus notes but this time it is more orange oil rather than lemon zest. There are also notes of brown sugar, green fruit (pear and apple), honeycomb sweets, sweet cocoa, and hazelnuts. This whisky has flavours of distinctive orange plus milk chocolate and raisins, graininess, toasted nuts and honeycomb. The sweetness is tempered with a burnt edge and a zestiness that keeps this whisky mouth watering and moreish. Again the finish is not overly long but it remains mouth watering and fresh.

What’s the verdict?
The Springwood is light, fresh, delicate and subtle – what you would expect from the classical idea of a Scottish lowland whisky. It would be a great whisky for a warm summery day or a warming hot toddy. While not overly complex it is a very drinkable whisky and at around £35 it offers great value for money and something quite unique.

We joked that the Heartwood smells as though it should be poured over rum & raisin icecream, but this may not be as silly as it sounds. Again this whisky is not overly complicated but will most definitively have you reaching for another glass. This will be sold for around £42.

Both whiskies would be welcome additions to many whisky cupboards as they are bother friendly, approachable and characterful. Each with their own distinct personality and mood - very much like the wood styles they are named after.
posted by Karen at 7:16 AM

Thanks for sharing your thoughts on these. I'm very much looking forward to trying these myself. Thank goodness I'm flying soon...

Thanks for the review. I recently bought a bottle of Heartwood. Planning to open it for Christmas

I quite enjoy the Springwood but why is there no mention of its age?

Heartwood is very fine But Springwood is no to rekon...
Kenna..

Why there is no mention of the age