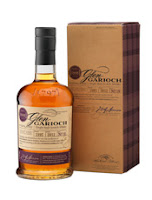 The Glen Garioch 1995 Vintage is the latest release in the east Highland distillery's popular small batch single malt programme. It is the sixth special addition to the Glen Garioch range. It was produced and filled to cask just months before the distillery was mothballed (this is the term used when production ceases at a distillery, but the equipment remains intact) in October 1995.  Some of the other whiskies in the series have been very good, so we were excited to try this new expression.

Glen Garioch is located in the village of Oldmeldrum, which is found between Inverurie and Aberdeen in the east Highlands.  It is one of the oldest distilleries currently in operation in Scotland, having been founded in 1797 by Thomas Simpson. The distillery is currently owned by Morrison Bowmore, who are part of the larger Japanese company of Suntory, and is relatively small with an annual capacity of just under one million litres.  Morrison Bowmore re-opened the distillery in 1997 and they have established Glen Garioch as a cult single malt range.

The 1995 Vintage used some of the last ever barley which was malted and peated on site at Glen Garioch (pronounced glen-geery). Following a two year period of silence, production resumed in 1997 but without the use of the old malting barns which had been operation for nearly 200 years. Prior to the closure the malted barley was peated to a level of 8ppm (phenols parts per million, which is the scale used to measure the strength of peat in barley), but since 1997 the malt has been unpeated.

There are just 6000 bottles of the 1995 Vintage available. It has been bottled at the natural cask strength of 55.3% ABV and is available now from specialist wine and spirit retailers, with a recommended price of £55.

Our tasting notes
The colour is golden yellow and the nose is expressive and packed with vibrant aromas. There is plenty of initial vanilla and honey, which is followed by some lovely fresh tangy fruit (think of green apple, pear and peach).  There is also plenty of wood spice, which is reminiscent of freshly sawdust and baking spices (cinnamon, nutmeg etc). Underneath are notes of brown sugar and a hint of faint tobacco-like smoke.

On the palate, this is even more vibrant and intense than the nose suggests.  This is a big, expressive whisky with the prominent, drying wood and oak spices giving an intense immediate hit.  This is back up by a lovely, slightly oily and viscous sweetness - the combination of flavours include plenty of honey and vanilla, which are backed up by further notes of coconut, malted cereals and the tangy green fruit (the crisp apple and pear again).  The effect is complex and mouth watering with a lovely sweetness balancing everything out.  The wood spices creep back in towards the end, along with the faint smoke, and these lead you in to the finish.

The finish is predominantly dry with the vibrant wood spices to the fore.  These spices prolong the finish very well.  There are hints of sweetness, especially the honey and green fruit, but nothing more than a hint.  The distant smoke is also present, as is the returning hint of peach.

What's the verdict?
This is a lovely whisky, although it may be a little strong or dry for some tastes.  The addition of water softens the intense wood spices and makes it feel softer and creamier on the palate.  The honey and vanilla notes come through and shine, as does a creamy soft coconut note and something floral.  We found that it could take quite a lot of water, so if you get a bottle of a sample then it is worth trying with differing quantities.

Glen Garioch have done a good job with their limited edition Vintage range to date and this 1995 expression doesn't disappoint.  Even if you can't find (or afford) this expression, then it is worth searching out and tasting the single malts from their core range, which seem to be under rated and offer great quality and good value for money in our opinion.