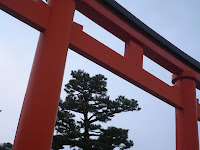 Japan is arguably the home of the whisky bar. There are huge amounts of them all over the place, particularly in Tokyo. Consequently, when my girlfriend and I decided go on holiday to Japan, I immediately began looking into what whisky bars I could drag her along to and spend stupid amounts of money in. 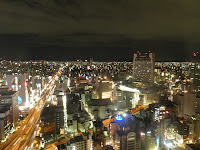 As we were only staying in Osaka for one night there wasn’t much time to fully experience the cities famous nightlife but having heard so much about Bar Augusta Tarlogie we made this our number one destination for our one night out in the city.

Bar Augusta is situated in the back streets between Umeda and Nakazakicho subway stations. As with a lot of Japanese bars there was no frontage to speak of, just a green glowing Woodford Reserve sponsored sign marking the entrance. We passed through the heavy wooden door and into the bar.

The bar is small. Low, soft light and lots of wood gave a cosy, relaxing atmosphere. The bar runs along one side of a narrow L shaped room and there was all sorts of whisky memorabilia dotted around the room. There must have been seating for no more than fifteen people in the whole bar, no room to stand!

The whisky selection is as varied as it is huge. Scotch single malts take the lions share of the shelf space but there were also very good selections of Bourbons, Japanese and Irish whiskies. Regular bottlings found themselves alongside discontinued rarities and hard to find independent releases. Initially I was a little bowled over by the selection as there was no menu and I had no idea how much anything cost. Owner Toshio-san was more than happy to guide me, even though I had to keep asking how much everything cost. Luckily you can buy half measures at half the price which saved me a lot of money. Bar Augusta also specialises in Cocktails and it was a pleasure to watch Toshio-san whip up one of his creations as we sat at the bar sipping away at our drams.

Bar Augusta Tarlogie is definitely somewhere I would recommend visiting if you’re in Osaka. Our bar man for the night, owner Toshia-san was very friendly and helpful and enthusiastic and he certainly knew his whisky. We had a great evening, talking all things whisky with him late into the night. 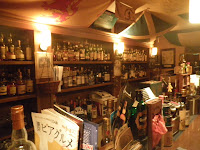 Having been visited in the shop by Toshi-san, the proprietor of this establishment a month or so before, I made the Highlander Inn one of my top places to visit while in Tokyo. I wasn’t disappointed.

The Highlander Inn is located a little down a side street right by one of the entrances to Nakanosakaue subway station (fourth stop from Shinjuku on the Marunouchi Line). A little sign lights the way, down a small flight of stairs and through a door into a basement bar. Quite large by Japanese standards. The bar runs all along the far end of the room. Wooden tables fill the floor space in front which is divided by wooden beams to break up the space and create a more intimate atmosphere. The lighting is subdued and there are Scottish, whisky and British beer memorabilia all over the place. All the old tins and tubes of the whiskies that have been opened and drunk in the bar over the years were stacked up in one part of the room. We also noticed they’d kept all the little booklets you get in the tin with your whisky in a great box on the bar, alongside a couple of baked bean tins!

The whisky selection is nearly all Scotch single malt and they have a comprehensive collection of standard bottlings and more interesting bottlings, from independents like The Whiskey Agency for example. We had some really interesting stuff such as Coleburn (never had one before), Caperdonich, Glen Albyn and an independent bottling of Hazelburn. If you are looking for something more unusual, feel free to ask, the staff really know their stuff and love talking about whisky so will be more than happy to help you choose your dram.

We had a great time at the Highlander Inn and we’ll definitely be popping in there when we’re in Tokyo again. Toshi-san and his staff were so friendly, they really made us feel as if we were hanging out with them at the bar (even though they were really busy). I suppose that’s the sign of a good barman. 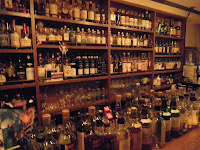 If you do want to sample some of the local whisky (and why wouldn’t you) Shot Bar Zoetrope is the place to go. It’s located on one of the small side streets just north of Shinjuku station. Again, no frontage. A small sign set out onto the street leads to way through a glass door and down a little corridor that leads you to a lift. Zoetrope is on the third floor. Like Bar Augusta Tarlogie, Zoetrope is small. A bar, overloaded with whisky both on and behind it, runs down one side of the room where there’s space for five of six tables. The room is quite minimally decorated and is dominated by a huge projector screen at the far end showing old movies.

There are hundreds of Japanese whiskies from super rarities to supermarket staples. Suntory and Nikka obviously dominate but there are also large ranges of more unusual stuff like Karuizawa, Hanyu and Shinshu and an ever growing range from Chichibu. The prices were surprisingly reasonable and again, there was no problem at all with ordering half measures. We had some Komagatake, a couple of Karuizawas, heavily peated Yoichi, single cask, peated Yamazaki and Zoetropes own rum finished Hanyu, all recommended by owner Atsushi-san, all fantastic.

If you’re in Tokyo this is a must visit if you’re interested in Whisky. There’s so much whisky here that you cannot try anywhere else in the world. Just one visit doesn’t do Shot Bar Zoetrope justice. Alas, one night was all we had time for but we’ll be back one day!

None of the bars were particularly cheap but they’re whisky bars so that’s as much as can be expected and the ability to buy half measures really helped the budget. What’s more important though is that these bars were really special, you’re not just paying for the whiskies; you’re paying for an experience as well. For the amazing dedication, attention to detail, excellent customer service, knowledge, enthusiasm and range of whisky on offer, Japan is tough to beat. Our warmest thanks go to Toshio-san, Toshi-san and Atsushi-san for there fantastic hospitality.